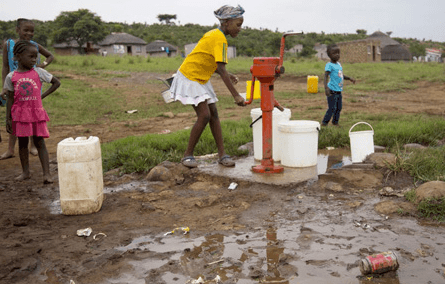 Only about half of the 4.5 million people living in the Zimbabwe capital of Harare and four satellite towns have access to municipal water supplies, with some suburbs going weeks without water and reported cases of typhoid beginning to emerge, Climate Home News reports.

“There is a rotational water supply within the five towns,” he added. “Some people are getting water five days a week, especially in the western suburbs, but the northern suburbs are going for weeks without a drop in their taps.”

Chideme said people were getting their water from merchants, open wells, streams, or several boreholes drilled by the council, and Dr. Jean-Marie Kileshye of the regional water resources network WaterNet warned the city’s supplies are badly polluted.

“Water-borne diseases linked to these boreholes are on the rise, but people have had to take in their own hands water supply because the utility has failed to provide water,” he said. One community reported 10 cases of typhoid in the first week of this month.

Climate Home connects the situation in Harare to water shortages in Chennai, India this year and Cape Town, South Africa in 2018, noting that “Zimbabwe is getting warmer as the climate changes and heavy rains and droughts are becoming more intense. In Harare, rains are expected in October at earliest.”

But a 2018 drought warning from the Southern Africa Development Community apparently never got through to decision-makers. Zimbabwe climate scientist Brad Garanganga said under-resourced meteorological departments had been unable to help policy-makers “make decisions to take action on this type of important information ahead of time, rather than wait until a crisis hit”.

Now, two of the four dams that feed the city are completely dry, and one of its two treatment plants is offline. The two remaining dams, Chivero and Manyame, are larger, but so polluted by upstream sewage, agricultural, and mining waste that they require more than 10 chemicals to purify their water, at a monthly cost to the city of $3 million.

A key part of the problem is that Harare’s water system is out of date: it was designed to serve 350,000 people, but in a country gripped by constant economic crisis, it was last upgraded in 1994. Some sections have been in use for 60 years, far beyond their preferred lifespan of at least 15. In 2011, Zimbabwe signed a $144-million water infrastructure loan with the China Export-Import Bank, but not all the work has been done, with the project tripping over administrative issues and allegations of corruption.

A plan to build a new dam as an alternate source of water supply dates back to 1990, but the work is still not complete, Climate Home notes. Meanwhile, there’s a renewed effort to engage citizens in managing their own water use.

“Technology by itself will not be good enough,” Kileshye said. “The people across the whole spectrum from households, industries need to be made aware that they are part of the solution to sustainable water in cities.”