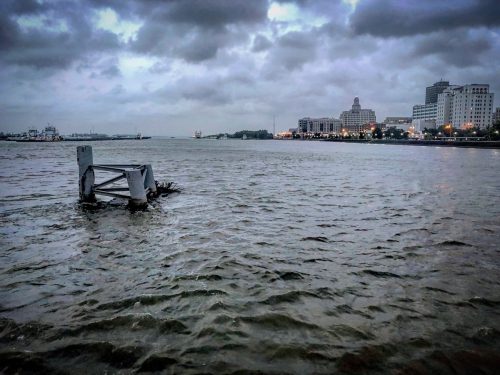 New Orleans, Baton Rouge, and other Louisiana communities caught a break over the weekend as Barry, the first named storm of the 2019 season, briefly came ashore as a hurricane before being downgraded to a tropical storm, then a tropical depression.

The region still saw major flooding and power outages, and is still counting up the damage. But the levees held, no lives were lost, and officials were left to point out that the impact could have been far worse—and stress the continuing need for resilience planning and preparedness.

“We absolutely made it through the storm. Beyond lucky, we were spared,” said Mayor LaToya Cantrell, after she issued the all-clear Sunday afternoon. “As those [rain] bands moved closer to New Orleans, it just seemed to go around us.”

“This was a storm that could have played out very differently,” said Governor John Bel Edwards. “We leaned forward, we were prepared for the risks that had been forecast,” and “we are thankful that the worst scenario did not happen.”

At the same time, “the slow movement of this weather system means that it is far from over for our state,” Edwards added early Sunday.

“Government officials continued to urge residents to be cautious,” the Washington Post reports. “Rainfall can be a stealth killer in these extreme weather events as rivers rise and flash floods become potentially lethal. The National Weather Service on Sunday warned of ‘dangerous, life-threatening flooding’ across Louisiana and Mississippi and points north.”

The Post recounts that “Barry made landfall Saturday afternoon at Intracoastal City, LA, meriting hurricane status for only a few hours before it weakened as it rolled north. By midday Sunday, the centre of the circulation was near the Louisiana-Texas line, but it was a lopsided storm, with rain bands extending far to the east, well into Mississippi. Later Sunday afternoon, the National Hurricane Center downgraded Barry to a tropical depression.”

The paper explains that “several converging factors made Barry an unusually dangerous tempest given its relatively modest wind speeds. The Mississippi River has been unusually high for months due to heavy rains in the centre of the country. The storm surge from Barry and the associated rainfall could have forced the Mississippi perilously close to the top of the levees that protect New Orleans.”

Ahead of the storm, offshore oil and gas operators in the Gulf of Mexico had shut down production, and InsideClimate News explained the “triple whammy” Louisiana could face through the combination of record floodwaters coursing down the Mississippi, downpours driven by Barry, and a storm surge pushing water up the bayous at the river’s mouth.

In the end, “the storm migrated farther west than expected before it made landfall,” the Post states. “The storm surge along the coast was feebler than feared in many places, and the Mississippi River stayed well below the tops of the levees.” There were no deaths definitely linked to the storm, the Post adds, though 93 had to be rescued, including 48 medically fragile patients evacuated by National Guard from a health centre that had lost power. It was a sharp contrast from 2005, when Hurricane Katrina flooded 80% of the city, killed nearly 1,500 mostly disadvantaged people, and “prompted government officials to develop a new playbook for evacuating people in advance of a major hurricane.”

After Barry, city officials “were pleased by the performance of their network of 120 pumps, which had been overwhelmed by an extreme downpour Wednesday that flooded parts of the city and caught residents by surprise,” the Post writes. “But city officials also sounded a cautionary note. They want to improve their ability to prepare for and respond to the kind of violent storms that in recent years have intensified rapidly over the abnormally hot waters of the Gulf of Mexico.”

Cantrell, who was elected mayor last year, called for community conversations about how to protect residents as sea levels rise, noting that it still takes 60 hours to stage a major evacuation at a time when killer storms can take less time to develop.

“The weather patterns and the rains are coming down harder, faster, more intense, bigger rain drops,” said Kristin Gisleson Palmer, a New Orleans city councillor whose constituents live on both sides of the Mississippi River. “If we are having hundred-year rainstorms every year, then something is changing,” meaning the U.S. government has to rethink how it supports communities facing major storms that fall short of hurricane status.

“It’s the kind of compounding of risks that scientists have been warning about as the climate changes,” InsideClimate News wrote. “Climate change has loaded the dice for this kind of coincidence, scientists say.”

In the days leading up to Barry’s arrival, “it was the water, rather than the wind, that was causing the most intense concern,” InsideClimate added. “Like Hurricane Florence in North Carolina last year and the remnants of Hurricane Harvey, which sat over Houston for days in 2017, Barry was moving slowly, creating a threat of days of heavy rainfall and flooding on the coast and lower Mississippi Valley.”

While most of the region was spared the full force of the storm that might have been, Mother Jones carried a story Friday from Isle de Jean Charles, a community of Biloxi-Chitimacha-Choctaw fishers and trappers that has lost 98% of its land to oil extraction, hurricanes, and sea level rise since 1955. “Once five miles wide and filled with lush cypress groves and cow pastures,” the U.S. Geological Survey reported in 2017, “barely a half-square mile of the island remains above water.”

The Native American tribe only settled on Isle de Jean Charles in the 19th century after being forced off its original land under the Indian Removal Act, Mother Jones writes. In 2016, the island’s 99 residents became America’s first climate refugees, receiving a $48.3-million federal resettlement grant described as “the first allocation of federal tax dollars to move an entire community struggling with the impacts of climate change”.

But with Barry approaching, those remaining on the island were left to worry about the risk.

“It is frustrating. Another hurricane season and we have to make sure people are safe,” said Biloxi-Chitimacha-Choctaw tribal secretary Chantel Comardelle, who moved off the island in the 1980s after the trailer she occupied with her mother flooded in a storm. Her grandmother still lives on Isle de Jean Charles.

“We would have hoped our folks would have been in the resettlement already and in a safe environment.”

Mother Jones said the resettlement site 40 miles north is in Terrebonne Parish, a region of southern Louisiana known locally as “the bathtub” for its frequent flooding.