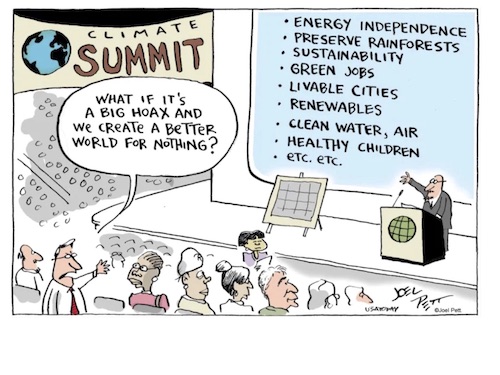 Reversing the climate crisis will cost less and deliver more positive impacts than most estimates usually assume, and that gap in analysis is shaping up as a barrier to climate action, CBC reported last week, as part of its In Your Backyard climate series.

“Co-benefits such as reducing deaths from air pollution and boosting technological innovation may lower the net costs of climate action to zero or even lead to a net economic benefit rather than a cost,” CBC states. “And failing to take those into account—effectively miscalculating the costs of climate change—may lead to bad decisions and inaction that are more costly in the long run,” by wrongly making greenhouse gas reductions look like a bad deal for participating countries.

The post leads with a now-10-year-old cartoon, published before the 2009 Copenhagen climate summit by U.S. illustrator Joel Pett, that showed a conference presentation slide listing the benefits of climate action. “What if it’s a big hoax and we create a better world for nothing?” asked one audience member.

A decade later, “there is stronger scientific consensus than ever that climate change is real, and more and more evidence that fighting climate change has positive side effects,” writes reporter Emily Chung. “Environmental researchers and policy advisers now say it’s crucial to take those into account when making decisions about climate change mitigation and adaptation.”

“Essentially, we’re just leaving dollars on the table by ignoring co-benefits,” said environmental economist Kirk Hamilton, a visiting professor at the London School of Economics who has done in-depth work on the co-benefits of climate change mitigation. “In some ways, we’ve been doing the modelling wrong.”

While those co-benefits will accrue on their own, “you’re just not feeding [them] into your decision making process, which means you’re making bad decisions,” he added.

CBC notes that air pollution can cut GDP by more than 10% in a heavily-polluted country like China, citing a 2016 United Nations report that showed air pollution-related deaths falling 20 to 40% if greenhouse gas emissions are halved between 2005 and 2050.

“Hamilton’s research has found that the health co-benefits of reducing greenhouse gas emissions could be worth US$100 per tonne of CO2 in high-income countries like the U.S. and Canada and $50 per tonne in middle-income countries like China,” the national broadcaster adds. “That’s quite a lot, given that the cost of abating a tonne of carbon pollution in 2015 was estimated to be less than $36 per tonne on average—meaning that any country that cut its emissions would get a significant net benefit from health impacts alone.”

The UN report found that co-benefits represent 53 to 92% of the economic gain from climate-related forest projects and more than half the positive impact of investing in energy efficiency and renewable energy, while “reducing fossil fuel dependence in the U.S. decreases the danger of disruptions in the energy supply and economic losses due to price volatility, worth about $5 per tonne of CO2.,” CBC states. “Some co-benefits, the UN notes, are indirect, such as freeing public resources for other uses.” And “Hamilton said environmental regulations targeting emissions can give companies an incentive to invest in knowledge and technology,” leading to new innovations that amplify their positive economic impact.

The news report cites a recent project by Ann Dale, a professor in the School of Environment and Sustainability at Royal Roads University, to map the co-benefits of climate action on behalf of the British Columbia Climate Action Secretariat. “The map shows, for example, that greener buildings lead to higher energy efficiency, better water quality, and new job opportunities,” CBC reports.

With that kind of information in hand, “you can show political decision-makers it’s not jobs versus the environment—there’s money to be saved by doing the right thing, and there’s benefits to be achieved,” Dale said. “What we need them to do is track the costs and benefits when they implement a climate action.”