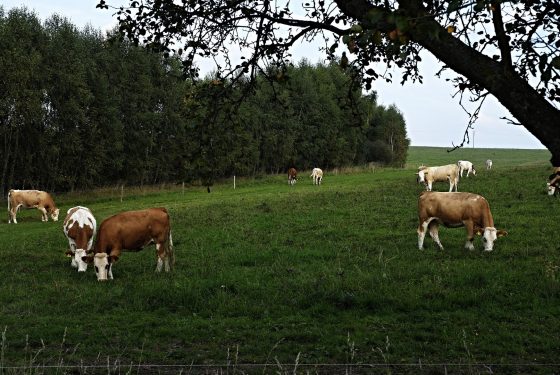 Intensive silvopasture is one of the 20 carbon reduction options that Drawdown lists as Coming Attractions—strategies that weren’t ready for prime time when the book was published, but looked like promising approaches through mid-century.

While traditional feedlots have become infamous as climate wreckers, intensive silvopasture may be poised to become a climate superhero, writes Drawdown, with a recent five-year trial producing carbon sequestration rates in excess of “an extraordinary 10 tons per acre.”

The technique involves rapid rotation of large herds of livestock through dense intercroppings of traditional grasses, trees, and especially woody shrubs. It currently depends on dense plantings (4,000 per acre) of an edible, fast-growing woody shrub calledLeucaena leucocephala, a carbon sequestration powerhouse that is particularly high in tannins, chemicals which researchers believe improve the efficiency of the ruminant gut.

That crucial feature could hold the key to cutting methane emissions in animal agriculture, while allowing yet more carbon to be sequestered in the tissues of animals that grow substantially larger than their counterparts in feedlots.

Because Leucaena leucocophela is invasive in places like Florida, and toxic to non-ruminants like horses (and humans), the search is on for more benign species that still share its pedigree as a “fast-growing, high-protein plant that can handle heavy browsing and resprout quickly,” Drawdown reports.

Documentary Short Declares Plastic Recycling ‘Like a Band-Aid on Gangrene’