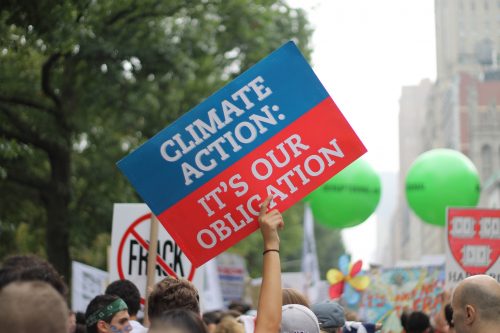 It may give the “ethical geniuses” who support fossil fuels a momentary boost to claim hypocrisy when low-carbon advocates drive to protests or fly to meetings. But it does nothing to acknowledge or solve the real challenges on the road to an actual, carbon-free economy, veteran communicator and NewsWatch Canada co-founder Robert Hackett argues in a post for rabble.ca.

We’ve all heard the same “rhetorical chestnut,” Hackett writes: “You hypocrite! You use oil products all the time. Hah! I bet you even drove to the protest rally.” But “before handing out philosophy awards to these pro-petro Ethical Geniuses, their chestnut deserves closer inspection. Let’s unpeel it.”

First, Hackett notes, no one is suggesting it’s realistic to shut down fossil production tomorrow. “The real choice is between a planned and fast phaseout of fossil fuels, or a catastrophic economic and social collapse, as the fuels that took millions of years to produce run out in a few decades. Most of the protests focus on the expansion of extreme energy, like the Athabasca bitumen sands.”

After that, “most people I know who recognize greenhouse gas emissions as a threat to human survival take reasonable steps to limit their own carbon footprint.” And those who may take several flights per year for work, family visits, or an occasional vacation have worked out their own “partial offset”: anyone with the means to do so will “donate generously to organizations advocating for sane climate and energy policies. And we’d be fine if air fares doubled to pay for the airline industry’s real costs of business, so long as such user-pay costs were offset by more progressive income taxes and/or a dividend to low-carbon users.

But the last and most significant of Hackett’s three responses is that changing out a few light bulbs won’t drive greenhouse gas reductions far enough, fast enough to solve a crisis that is embedded in the structure of every economy. “As individuals, consumers can take symbolically valuable steps, but they don’t have a real choice to opt out of a high-carbon economy,” he writes. “In many cases, there aren’t alternative products readily available,” and “the leave-it-to-consumer choice argument ignores that the market produces that which is profitable, which is not necessarily the same as that which is socially necessary.”

Particularly when fossil fuel subsidies in Canada distort those economic choices to the tune of $3.3 billion per year. [Much more last year—Ed.]

There’s a method behind the pro-fossil message, Hackett notes. “The Ethical Geniuses shift the burden of responsibility onto consumers and away from where it most belongs: the institutions that are actively working to lock us further into fossil fuels, even if it means over-developing dangerous ‘extreme’ energy,” he writes. That’s because “the real intent of the hypocrisy trope, as researcher Shane Gunster and his colleagues note, is to shame and silence the critics of fossil fuel dependency, and ‘to cultivate cynicism about the potential for responses to climate change beyond the merely symbolic’.”

Their study of a dozen major news outlets in four countries identified Canada’s National Post as the most likely to hammer away at the hypocrisy theme.

One way to answer the charge is to change the channel, Hackett concludes. “Abandon the whole debate about who are the ‘real’ hypocrites, an argument that cuts both ways,” he advises. “Instead, recognize that the gap between green aspirations and daily behaviour is inescapable in a society marinated in fossil fuels. Instead, support collective action and policy solutions that are adequate to the scale of the problem.”