Documentary Short Declares Plastic Recycling ‘Like a Band-Aid on Gangrene’ 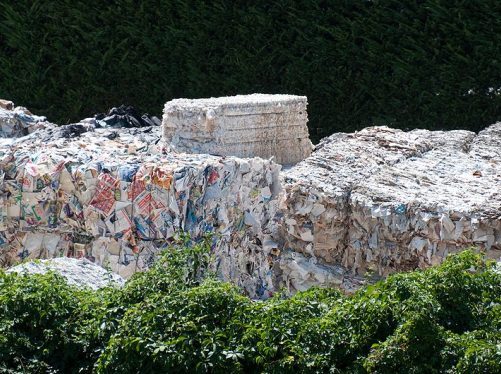 “Recycling is Like a Band-Aid on Gangrene” is the title of Memorial University geographer Max Liboiron’s recent documentary short celebrating her research into microplastics that are poisoning the world’s oceans.

Such “equitable tools” that can be built from everyday materials by anyone, with no need for special credentials or a grant for purchase, enable the kind of citizen science that Liboiron identifies as critical to avoid reproducing a deeply political, entirely “crappy” status quo.

“Every time you decide what question to ask or not ask others, which counting style you use, which statistics you use, how you frame things, where you publish them, who you work with, where you get funding from…all of that is political,” she declares.

While they’re out on the water, the scientists find microplastics everywhere, at one point recognizing some nearly-invisible detritus as a sparkle of toothpaste gel. Of intense concern, Liboiron tells the camera, is that plastics act like sponges, absorbing oily toxins like PCBs and flame retardants, which in turn enter the food chain when they’re ingested by plankton, fish, and marine mammals.

As to how to address the avalanche of plastic waste that continues to be produced around the world, Liboiron says: “Recycling is like a band-aid on gangrene”—providing no cure, and far too late to aid in prevention.

Rather, “the only mode of attack is to deal with a heavy decrease in the production of plastics,” which in turn means confronting the industries whose bottom lines depend on it. For the Canadian government, she said that effort should begin with withdrawing all subsidies on oil, noting that any given shred of ocean-going microplastic owes its existence to massively powerful plastic, petrochemical and, ultimately, fossil fuel industries.

Supported by subsidies, such industries also benefit from another idea from status quo science: a notion of “thresholds of pollution” that permits a degree of contamination and necessarily treats some forms of life as more valuable than others.