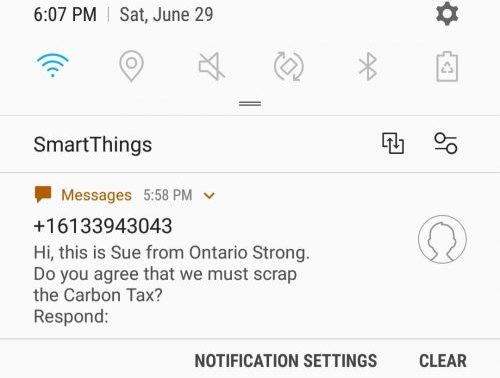 Propaganda by automated text message appears to be the favoured modus operandi of a newly-minted lobby group pushing opposition to the federal carbon tax—possibly because Elections Canada guidelines do not currently require the third parties behind such communications to disclose their finances.

Though the directors of the non-profit Canada Strong and Proud have declined to comment on whether they are behind the anti-carbon tax text messages from “Sue,” “Mark”, and “Nicholas” that have been pinging cell phones across the country over the last three weeks, the organization’s digital fingerprints leave little reason for doubt, CTV reports.

While Canadian law does not prohibit provincial groups from sharing funds or voter information with federal affiliates, the entities involved in the recent spate of anti-carbon tax text messaging may eventually find themselves sailing close to the wind as defined by Elections Canada, in the form of the agency’s third party advertising regulations.

For now, though, the groups are running free, since “even in the official pre-election period, with third-party advertising rules firmly in place, there are some grey areas when it comes to disclosing the financing of text message campaigns,” CTV states.

“And how much money was spent on a policy-focused text message campaign would only need to be disclosed if the third-party group used the collected information for partisan purposes,” said an Elections Canada spokesperson.

And “even if the data is used for partisan purposes, like specifically advertising a political party in an area where an anti-carbon tax text message campaign showed strong opposition to the environmental policy, there’s a chance it could fly under the radar,” CTV adds.

In the current regulatory environment, “it would take a citizen filing a complaint, an Elections Canada auditor noticing the issue, or the third party group checking in with Elections Canada to see whether or not it is partaking in a partisan activity before actually doing it.”

Canada Proud and Strong’s statement to CTV did express its intention “to be fully compliant with all relevant election laws.”