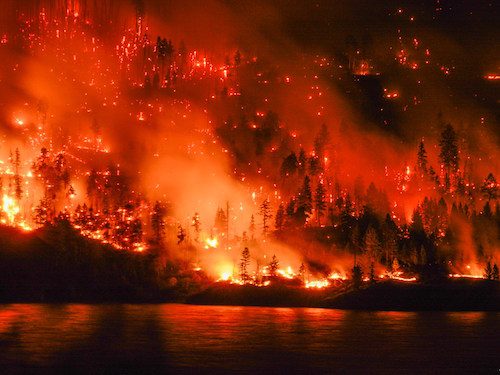 Made physically and psychologically ill by choking smoke from wildfires that grow ever more commonplace as the climate crisis escalates, more and more western Canadians are grimly choosing the painful social and economic costs of relocating over the toxic toll of remaining.

While “there are no hard statistics on the number of people leaving Western Canada due to the smoke from wildfires,” reports National Observer, evidence is accumulating that the increasing frequency of forest fires is a pressing concern for many people who currently make their homes in British Columbia or Alberta.

Case in point is 34-year-old Georgia Fisher, who just moved east with her partner and their infant daughter. Speaking from her new home in Peterborough, Ontario, Fisher said that having spent the past 15 years in Alberta, she “wouldn’t have begun to consider this move if it weren’t for last summer and all the smoke.”

Bruce Blackwell of B.A. Blackwell and Associates, a North Vancouver forestry and environmental management consultant who advises communities that have been through wildfires, said the past few years have seen a sharp uptick in business. “I am getting calls from almost all sectors of society—business, government, settler, and Indigenous populations,” he said. “People are concerned about their assets.”

That’s because, when it comes to western wildfires, there is simply “no end in sight,” Observer states.

Combining “over 100 years of effective fire suppression” with more recent insect infestations has led to “immense fuel buildup,” he explained. That means wildfire “is a 40- to 60-year problem, and it’s not going away.” And now, “the fires we are seeing are so big the government doesn’t fight them. Instead, it focuses on getting people out of the way.”

For those not immediately in the path of the flames, but well within the penumbra of choking smoke that wildfires invariably generate, weeks and even months of physical and psychological misery are the fallout.

“For most of August last year, the air quality in Calgary was terrible,” Fisher told Observer. During that time, “my daughter had especially sensitive lungs due to being born three months premature, so taking her out was a really bad idea.” But it was pretty much impossible to keep their daughter safe from smoke even inside the house, as “the smoke just seeped in.”

While families like Fisher’s are making the difficult decision to leave beloved homes behind, others are increasingly rethinking their dream of moving to wildfire-prone places like British Columbia.

“You have to consider the possible stress of being on alert, the disruption to your daily life, and the strain on resources and in neighbouring communities,” said Hannah Sutherland, who had been looking to buy land in B.C. “If insurance is unaffordable or becomes unattainable, where does that leave us? If we buy and it burns, or is threatened, what happens to the market price of our asset?”

The threat of choking wildfire smoke will be no less an enemy to a homeowner’s net worth, and the potential impacts are huge, notes Observer, given that “when one takes into consideration the effects of smoke, and not only the direct threat of fire, the geography affected from wildfires is immense.”

While Grafton, Ontario native Jasmine Cabanaw is willing to give her life in San Francisco one more year, another grueling summer of smoke will find her moving her family east in search of clearer skies.

“The fires and the smoke changes the society,” she said. “Everyone’s on edge, and your eyes burn, even indoors. It affects all areas of your life. When there’s smoke, people just feel really sick all the time.”