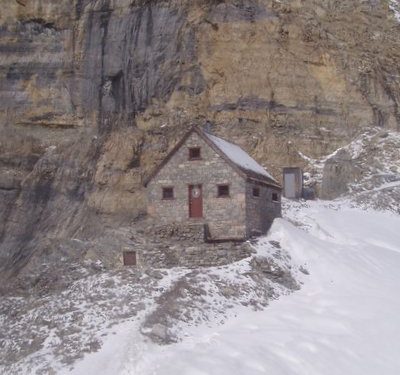 When a near century-old alpine hut high in the Rockies was precipitously threatened by thawing permafrost last August, Parks Canada struggled with just how much to publicly link the event to climate change—a poor decision, say those urging straight talk on the growing crisis.

Sitting at 2,925 metres, and “the second-highest permanently habitable structure in Canada,” Abbot Pass Hut had offered shelter to weary climbers for over a century when the slope on which it perched began to rapidly erode last summer, CBC reports.

Alerted by a mountain guide, Parks Canada “began crafting a communications plan for when journalists started calling.”  Ninth on a list of anticipated questions, and “under a heading instructing interview subjects to provide an answer only ‘if asked’,” was the query: “Is this issue a result of climate change?”

Records obtained by CBC News show an initial decision by the federal agency to deny any such connection, with public relations and communications officer Lesley Matheson declaring “we cannot link the slope’s erosion to climate change.”

While several Parks Canada staff approved the statement, one did not. Wilderness management specialist Glenn Kubian asked for a significant rewrite.

“I think we should acknowledge that this issue is directly related to climate change,” he wrote. “The slope is failing due to the melting of permafrost, which has been exposed for the first time in our known history. The slope is exposed due to the recession of glaciers in the area, an effect and correlation directly linked to climate change, which is well documented by glaciologists doing research in the mountain parks and Western Canada.”

Kubian also pointed to the policy relevance of the Abbot Pass Hut problem, given that Parks Canada “falls under the responsibility of the Minister of Environment and Climate Change.”

“Given that this is a major platform for our minister, we should take advantage of this important opportunity to educate the public on the direct effects of climate change,” he wrote.

He also flagged the problems that might beset Parks should the famous hut’s attachment to its precipice grow any more tenuous.

“As the slope continues to fail and media coverage intensifies, this question will come to the forefront,” he wrote. “I don’t think it would be in our best interest to deny that we are aware of a correlation and have to backtrack in the future.”

(What is already in the public record, thanks to the CBC report, is how repair costs originally estimated at C$250,000 have since ballooned to $1.13 million.)

The “approved, edited version” of Parks Canada’s public communications on the subject included this further sentence: “We can assume that climate change may be a factor in the slope failure, however, without concrete evidence cannot confirm it is a direct cause.”

“I think the tendency among the spin doctors and public relations practitioners is to be cautious, and that is also a tendency sometimes within the bureaucracy, as well,” he told CBC. “The problem is that when we’re getting spin and caution, as opposed to the truth, that prevents the public from making good decisions, both within the context of their personal lives as well as in the context of their political life.”

Back in the Rockies, the membership of the Alpine Club of Canada, which is responsible for maintaining the hut and handling its bookings, is “100%” certain climate change is the root cause of the sudden erosion. “It’s undeniable what climate change is doing to our mountains, and this is one example of it,” Club spokesperson Keith Haberl told CBC.