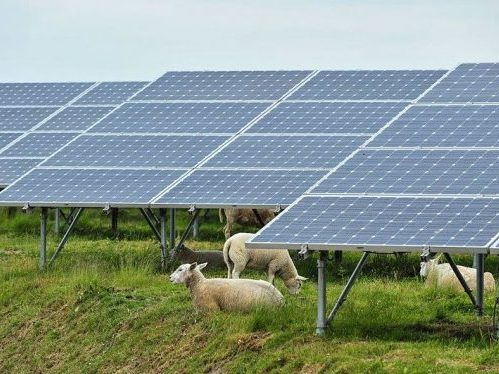 Two years after a family of Ottawa Valley sheep farmers partnered with French-owned EDF Renewables on a “vegetation abatement” pilot, their herd has grown, they have a significant secondary source of income, and EDF has secured a herbicide-free way to keep over-enthusiastic weeds from overtaking its solar arrays.

Chris Moore and Lyndsey Smith, owners of Shady Creek Lamb Company, were driving past an EDF solar installation, some 10 kilometres away from their 16-hectare farm west of Ottawa, when Smith had an epiphany, reports CBC. She realized they might be able to put together their struggle to purchase more land in a seller’s market with an apparent sheep’s heaven, possibly available for the asking, beneath the power-generating panels.

“Two years later, the couple’s three-year ‘vegetation abatement’ contract with EDF Renewables represents half their farm’s income,” and their flock has grown tremendously, CBC notes. The animals are thriving under a regime that has them moving every few days from one patch of rich, weedy ground beneath the panels to another.

“Shade is the enemy of a solar site, so we keep the plants from growing up in front of the panels and shading them,” Smith said.

After harvesting a first cut in the spring, which will be kept to feed their flock over the winter, Moore, Smith, and their sheepdogs keep their “solar ewes” and lambs moving amidst the panels throughout the growing season, with all that munching “virtually eliminating” herbicide use for an EDF array that powers 7,000 homes.

The partnership with EDF has proved a godsend for Shady Creek Lamb Company, as both urban sprawl and intense competition for remaining farmland (some of it from investors anxious to cash in on lucrative corn and soybean crops) had shut the smallhold farmers out from their dreams of expansion.

Noting that she had “never used the term ‘solar farm’” for something which is “a power station, really,” Smith said the term now seems justified, adding that locals “were really pleased to see sheep and livestock back on this land.”

Alberta Towns, Utility Embrace Solar as ‘the Business of the Future’