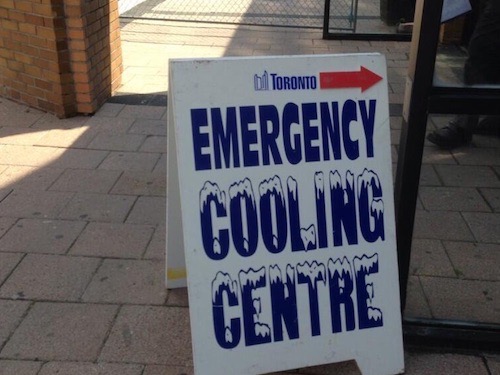 Eastern Canada’s two biggest cities have unveiled contrasting approaches as the summer heat wave season looms: while Montreal is making a renewed effort to protect vulnerable populations, Toronto is raising concerns that it is cutting back access to life-saving cooling centres.

Montreal’s emergency plan “is especially focused on vulnerable people such as the elderly, those with chronic illnesses, those living alone, outdoor workers, and newborns,” the Globe and Mail reports, after 66 people died of heat on the Island of Montreal between June 30 and July 8 last year. “The plan includes extending hours for pools, libraries, community centres, and homeless shelters if temperatures climb to dangerous levels for several days in a row.” It will also see firefighters going door to door to check on people at risk in a heat emergency.

In a news conference last week, Mayor Valérie Plante was very specific about what her city is dealing with. “With the floods of the spring, and the winter that was especially difficult, or last year’s heat wave, it is clear that we’re more and more vulnerable to extreme climate events, and we need to act,” she told media.

“She said officials will go door to door to check on people, hand out water bottles to the homeless, and encourage citizens to stay cool and hydrated,” the Globe states. “Longer term, she says the city has increased its budget to plant more trees in order to reduce the heat island effect.”

Montreal’s updated plan is based on a report that called on the city to create a registry of vulnerable people and plant more greenery to combat the urban heat island effect. “The study indicated people living in heat islands were twice as likely to die from extreme heat than others in cooler parts of the city,” the Globe notes. “Neighbourhoods in heat islands are also home to a higher percentage of people living in poverty.”

But it’s a different story in Toronto, where at least two street nurses are warning that this year’s change in approach could make vulnerable populations more so.

“Instead of operating seven specific cooling centres during periods of extreme heat, the city has mapped out roughly 270 places people can cool down anytime, including community centres, libraries, pools, shopping malls, and shelters,” CBC reports. “The former cooling centres, which opened during extended heat warnings, were air-conditioned places with trained staff. One of the centres operated 24/7 for the duration of the heat warning, while the others were open from 11 AM to 7 PM. Now, the facilities that previously served as specific cooling centres will be part of the so-called ‘heat relief network’ during their regular hours.”

The city says Toronto Public Health will try out a “proactive” strategy to help at-risk populations cope with heat emergencies, “providing heat relief through familiar, public locations closer to where vulnerable people are located.” One key feature: “Staff who were once homeless themselves will talk to people around drop-in centres, shelters, and respite sites, providing resources and connecting them with other places to cool down,” CBC writes.

Mayor John Tory said the new plan would mean “many more places people can go, many of them much closer to where people actually live.” But street nurse Roxie Danielson warned that many of the locations in the network, like wading pools and shopping malls, aren’t accessible to homeless people or others who are vulnerable.

“Some of our folks get kicked out of these places by security, they feel discriminated against,” she said, adding that the only places available at all hours are shelters and respite centres that “are already overcrowded.”

In the past, “the designated cooling centres used to have staff, healthy snacks, water bottles, and access to resources,” CBC writes, citing Danielson.

“Dear media. It’s probably a good idea to not call me about the new wonderful ‘cooling network’ that Toronto is running,” tweeted street nurse Cathy Crowe. “If you can’t see through the hype amidst worsening conditions for homeless, poor, vulnerable people I can’t help you. Everyone in the sector knows it sucks.”

Blair Feltmate, head of the University of Waterloo’s Intact Centre on Climate Adaptation, said Canadian cities must do more to combat the “new normal” of hotter summers, adding that Montreal could have seen hundreds of deaths last year if the heat had been accompanied by a power outage. “We need to take a lesson from each other to act pre-emptively, to get ahead of the curve to prepare for these extreme weather events, rather than letting them hit once or twice and realizing there’s a new normal we have to prepare for,” he told the Globe and Mail.

He added that Ontario reported zero heat-related deaths last summer, but only because it slices and dices the data differently than Montreal does.