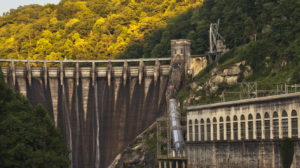 A federal export credit agency with a history of massively supporting fossil industry exports over clean technology is taking fire for failing to consider the environmental, human rights, and ethical implications of its financial support to Canadian businesses.

At least one project funded by Export Development Canada, the 2.45-gigawatt, C$5-billion Hidroituango hydroelectric dam in Colombia, has yet to generate any power, but forced 25,000 people to flee after causing a major flood in May 2018, the Globe and Mail reports. The project is nearly $1 billion over budget, and “has been plagued with accusations of corrupt contracts”.

A year after the flood, with 3,000 people still displaced and 27,000 living on high alert, “it all raises questions,” writes Latin America Bureau Chief Stephanie Nolen. “What did EDC officials know before they loaned nearly half a billion dollars to EPM,” the company behind the deal? “And what should they have known before Canada put its stamp of approval on this project?”

But those may not have been questions EDC was required by its enabling legislation to ask before approving the loan. The scheduled 10-year review of the federal Export Development Act, tabled in Parliament June 20, found that EDC’s disclosure practices “fall far short of other financial institutions, and that the agency is not legally obligated to consider the environmental or human rights impact of the financial support it provides to exporters,” the Globe reports.

“The latest review concluded that the EDC’s public reporting on the performance of its credit insurance operations does not meet requirements imposed on the private sector, even though it borrows using the federal government’s credit rating,” the Globe adds. “The EDC’s non-financial disclosures (for example, environmental and social effects of a proposed transaction) were also deemed inferior to those of other export credit agencies such as the U.S. Export-Import Bank, and international institutions such as the World Bank.”

That result reinforced the findings of the daily newspaper’s own recent investigation of the EDC’s lending practices. “The Globe reported that the EDC’s client roster includes companies that have faced allegations concerning corruption, human rights violations, and environmental abuses,” and “the federal agency has demonstrated a tendency to continue supporting such companies after other financial institutions have sanctioned them or cut them loose. Critics have also raised concerns about transparency and federal oversight of the Crown corporation.”

The EDC said it fully supported the external review and would be publishing a new disclosure policy next year. “We’ve always welcomed this process, as it presented an opportunity to step back from day-to-day business to consider EDC’s current and future roles in contributing to the success of exporters,” the agency told the Globe in a prepared statement.

The Globe story focuses on EDC loans with links to corrupt practices or human rights violations in South Africa, Mexico, and Bahrain. But the agency has also had a hand in helping Canada’s fossil industries extend their reach overseas, at the expense of a cash-strapped clean technology sector.Last fall, Oil Change International and several Canadian environmental groups revealed that EDC provided more than 12 times as much financial support to fossil companies as it did to clean technology producers between 2012 and 2017—C$62 billion for oil and gas, compared to only $5 billion for cleantech. In January 2019, EDC announced it would no longer fund thermal coal projects, but would still support Canadian oil and gas companies looking to take on new projects in other countries.