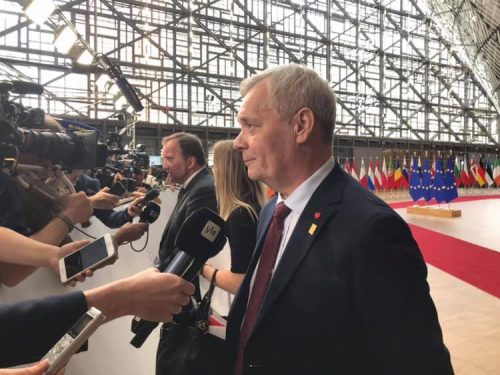 Climate change is set to surge to the top of the European Union agenda, at least temporarily, with Finland beginning its six-month term in the European Council presidency this month.

“Solving the climate crisis could be Europe’s next heroic act, one that will be admired and praised by future generations,” Prime Minister Antti Rinne told media in Brussels last week, affirming that climate action will be “a key priority of Finland’s presidency” of the EC.

“In the 2020s, the EU will have the chance to fulfill the expectations of its citizens by taking the lead in addressing the major challenges faced by humanity,” he added. “The crucial one is climate change, which is why the time for ‘yes, but’ policies for combatting climate change is over: in Finland, in the EU, and in the world.”

Now, “that ambition is reflected at EU level,” the UK-based publication states. “Together with France and Germany, Finland has been one of the most vocal countries in favour of a 2050 net zero emissions goal. The country is also calling for the bloc to slash emissions 55% from 1990 levels by 2030.”

At the last EU Council meeting last month, Poland, Hungary, the Czech Republic, and Estonia blocked consensus on the tougher target. Late last month, Polish energy official Tomasz Dabrowski told a conference in London his country would “probably” sign up to the target, “but we need to know what it will cost and the whole social impact of the transition”.

Finland’s Europe minister, Tytti Tuppurainen, said she was “optimistic” the four holdouts would support a net-zero target with the right financial incentives. “Probably it needs linkage to the multi-annual budgetary framework, because those regions and countries are, for good reason, a little bit afraid that their economies are going to be hurt,” she told News Now Finland. “If we can find a way to compensate them, it’s easier to find a solution.”