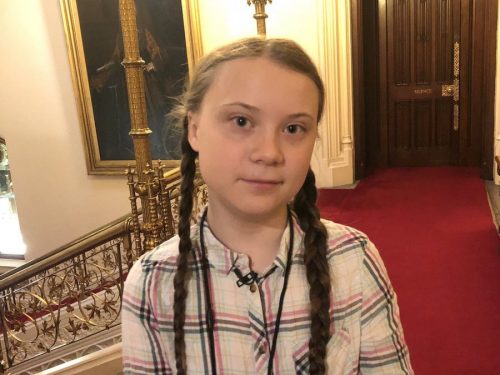 The infectious power of activism, the duty of wealthy countries to lead on climate action, and the absolute necessity of educating the public about the climate crisis were central themes in a recent trans-Atlantic conversation between 29-year-old U.S. Rep. Alexandria Ocasio-Cortez (D, NY) and 16 year-old Swedish climate activist Greta Thunberg.

Responding to Ocasio-Cortez’s query about how she has navigated this particular obstacle to her activism, Thunberg confirmed that “it happens all the time. That’s basically all I hear. The most common criticism I get is that I’m being manipulated and you shouldn’t use children in political ways, because that is abuse, and I can’t think for myself and so on. And I think that is so annoying! I’m also allowed to have a say—why shouldn’t I be able to form my own opinion and try to change people’s minds?”

The need and the right to form one’s own opinion in the face of overwhelming, often richly-financed propaganda was another topic the two discussed, with Ocasio-Cortez observing how “the Koch brothers in the U.S. have essentially purchased the entire Republican party.”

Asked by Ocasio-Cortez to identify her most “galvanizing” practices as a climate activist, Thunberg named her decision to “just [sit] down in front of the parliament, alone”. She explained that something in her determined solitude and her fundamental question—“Why should we study for a future that may not exist anymore?”—moved others deeply enough that many followed in her footsteps.

Commenting on the tendency in some other countries to paint Sweden as a role model, Thunberg noted that her homeland “is one of the top 10 countries in the world when it comes to the highest ecological footprints, according to the WWF,” and among the worst per capita.

And Swedes themselves tend to reject the mantle of leadership on climate action, she added. “The most common argument that we shouldn’t act is that we are such a small country with only 10 million inhabitants,” so “we should focus more on helping other countries.” That attitude is “so incredibly frustrating,” she added: “Why should we argue about who or what needs to change first? Why not take the leading role?”

Saying that she hears “the same exact argument” in the United States, Ocasio-Cortez pointed to the contradiction in declaring America “the best nation in the world,” while dismissing any responsibility to help that world thrive.

The two spent several minutes on the nature of good leadership, with Thunberg observing that “countries like Sweden or the U.S., since we are rich countries, need to go first” in addressing the climate crisis. “Because people in poor countries need to be able to raise their standard of living, we have a duty to lead when we already have, basically, everything.”

Thunberg and Ocasio-Cortez agreed that while many perceive leadership “as this glamorous, powerful thing,” it is actually enormously difficult, and “not fun.”

When Ocasio-Cortez asked how she keeps hopeful in the face of such a daunting crisis, and about the argument “that says if you educate people too much [about the climate] they’re going to think it’s too late and they’re going to wallow in despair and not act at all,” Thunberg recalled that before she began her school strike, she was herself deeply depressed. “I didn’t want to do anything, basically,” she said. But the knowledge that millions of schoolchildren are following her example keeps her “very hopeful,” as does her belief that ignorance, not “evil,” is what is truly holding people back from climate action.

Ocasio-Cortez agreed that action is a powerful generator of hope, recalling the anti-pipeline protests at Standing Rock as the moment when she “learned that hope is not something that you have. Hope is something that you create, with your actions. Hope is something you have to manifest into the world, and once one person has hope, it can be contagious. Other people start acting in a way that has more hope.”

That positive and productive contagion bears political fruit, she added, noting that “it is becoming harder and harder for elected officials to look people in the eye.”

Responding to Thunberg’s query about the state of climate denial in the U.S., Ocasio-Cortez recalled a history of fossil-funded disinformation so effective that at the end of the 1980s, “we had almost 40% of Republican voters not believing that climate change was settled fact.”

Recent years have been much kinder to truth-tellers, however, a change Ocasio-Cortez attributed in part to “our push for a Green New Deal, connecting everything that is happening to climate change.” Now, recent polls show 70% of Democratic voters expressing strong support for the plan, and for action to address the climate crisis. That’s a 50-point increase in just a year or two, from a time when “only 20% of Democratic voters, the more liberal voters in the country, saw climate change as a top issue.”

An urgent, ongoing problem still to be addressed is the abysmal failure of America’s “profit-driven” media to cover the climate crisis, she added.

While only 2% of Swedes deny the science of climate change, Thunberg replied, acknowledgement has not translated into action. “We aren’t talking about it, and it’s not a priority,” she said. “We are just treating it like any other issue.”

The American politician and the Swedish teen concluded their discussion by affirming the power of the young—and the young at heart—to change oppressive, broken systems. Driving young climate activists like herself forward, Thunberg said, is the clear-eyed recognition that “it is our future that is at risk.” The climate crisis is “already here and it’s going to get worse, and many of us understand that this is going to make our lives much worse.”

But one advantage for her generation is that “we aren’t as used to the system. We don’t say, ‘It’s always been like this, we can’t change anything,’” she said. That leaves young people free to tell it like it is—even if they have to speak over people calling them “too inexperienced, too naïve, too young, and too powerless,” Ocasio-Cortez replied.

“I think the mere refusal to accept [such dismissal] can change our world,” she told Thunberg. “That’s exactly what you have done.”