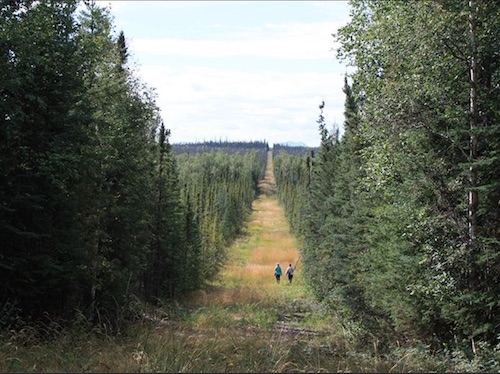 Climate-busting methane released when fossil explorers cut seismic lines through natural landscapes are enough to drive up Canada’s estimated greenhouse gas emissions from land use by at least 7%, according to a study released last week by a University of Calgary researcher.

“Methane is released when machinery cutting such lines through peatlands compacts the soil and removes vegetation,” CBC explains, citing a paper by UC geographer Greg McDermid. “That raises the water table, causing an increase in methane—a greenhouse gas at least 25 times more potent that carbon dioxide.”

[While the 25-fold measure is accurate over a longer time scale, it’s also true that methane is 84 times more potent than CO2 over the more relevant 20-year span when it’s most active in the atmosphere, and when humanity will be hardest-pressed to bring about deep emission reductions.—Ed.]

McDermid said fossils are doing what they can to address the problem, but his research also uncovered far more seismic lines than were previously believed to exist.

“Using high-resolution satellite photos, he and his colleagues discovered at least 345,000 kilometres of the lines and trails over Alberta peatlands—almost twice as many as in other public datasets,” CBC writes. “And he says researchers have just started understanding how to restore seismic lines on the landscape.”