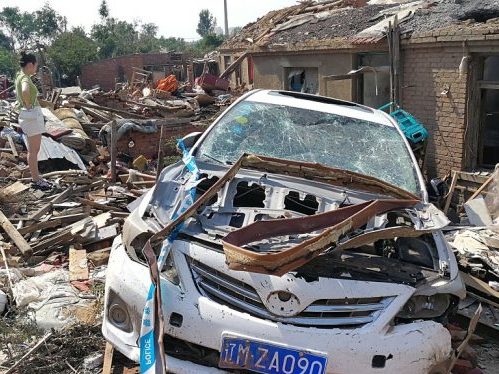 “In a statement issued on the sidelines of the G-20 summit in Osaka on Saturday, China’s top diplomat State Councillor Wang Yi, French Foreign Minister Jean-Yves Le Drian, and United Nations Secretary General António Guterres vowed to ‘scale up efforts to tackle the climate and biodiversity crisis’,” Reuters reports. “China and France also pledged to ‘update’ their contributions beyond their current ones to reflect ‘their highest possible ambition’.”

“I believe this is the first time the Chinese government has officially talked about updating their nationally determined contributions” under the Paris Agreement, said Zou Ji, a former member of the country’s climate negotiating team who now heads the Energy Foundation in Beijing.

“It is very challenging, but China still has a lot of room to improve and it should regard it as part of its own process of modernization.”

“‘Highest possible ambition’ can’t be there if there is no desire at all from Beijing,” said Greenpeace China senior climate advisor Li Shuo, adding that the reference to an “update” rather than a reaffirmation of China’s current climate target suggested a faster decarbonization plan taking shape.

The country’s leadership “get the idea that they need to enhance their ambition, not only for their image as international climate leaders but also for larger geopolitical reasons, such as supporting multilateralism,” he said.

Last month, Reuters states, the China Council for International Cooperation on Environment and Development (CCICED) called for the country to peak its emissions in 2025, ahead of its current target of “around 2030”, boost non-fossil fuels to 25% of its energy mix by 2030, and aim for carbon neutrality between 2060 and 2070. The organization said the tougher target should be included in China’s next five-year plan.

In Osaka Saturday, “the statement by China, France, and the UN also acknowledged the importance of achieving net zero carbon dioxide emissions by balancing CO2 sources with ‘sinks’ that lock up greenhouse gas, but it stopped short of setting a target date,” Reuters notes. “Europe is pushing for China to issue a 2050 pledge.”

This week, the news agency had Chinese government weathercasters linking a string of extreme weather events to climate change, after a tornado in the northeastern province of Liaoning killed six people and injured 190. While tornadoes are among the types of severe weather that are less straightforwardly attributed to climate change, the Global Times newspaper said they’re rarely seen in the affected area.

“The tornado damaged nearly 3,600 homes and affected more than 9,900 residents in Kaiyuan, a city of around half a million people, according to China Central Television,” Reuters reports. “Footage posted by CCTV on its official Weibo account shows dozens of flattened buildings in an economic development zone in Kaiyuan.”

On Tuesday, China’s weather bureau issued a statement connecting climate change to floods, droughts, and extreme heat waves. Reuters refers to record-breaking rainfall, up to 40 weather stations registering their highest temperatures ever, and temperatures high enough in Hebei province to put the local corn crop at risk. “The government of Hebei said on its official website that the cities of Baoding, Shijiazhuang, Hengshui, Cangzhou, Xingtai, and Handan were all expected to see temperatures above 40°C on Thursday.”