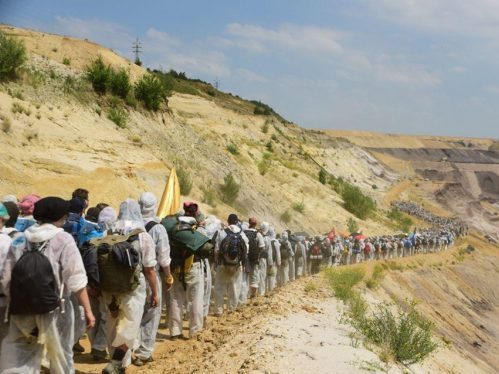 Hundreds of climate protesters broke through police lines and blockaded a 48-square-kilometre open-cast lignite (soft coal) mine in western Germany late last month, drawing attention to the country’s continuing reliance on fossil fuels and the dire risk it poses to a remnant of the 12,000-year-old Hambach Forest.

“We still have hope. The door is still open to a future within the 1.5°C limit, but we will miss this last chance if we don’t act immediately,” said Sina Reisch, a spokesperson for Ende Gelände, the alliance that organized the blockade.

So “today, we set out with thousands of people towards a future without fossil fuels, without exploitation, and without this destructive quest for infinite economic growth.”

“It’s important to increase the pressure on the government,” added protester Selma Schubert. “The government doesn’t do enough against climate change.”

Local police “ordered the activists to leave the vast, open-pit Garzweiler mine in western Germany, citing life-threatening dangers,” the Associated Press reports. “The mine has been a focus of environmental protests in recent years because the operator, German utility company RWE, planned to cut down a forest to enlarge it.”

The mine blockade “was among several demonstrations near the mine and adjacent power plants that attracted thousands of people to the village of Hochneukirch and surrounding Rhineland areas,” AP adds. “Earlier Saturday, dozens of protesters temporarily blocked railroad tracks used to transport coal. The vast majority of rallies and protests remained peaceful,” though there were initial reports of police injuries at Garzweiler.