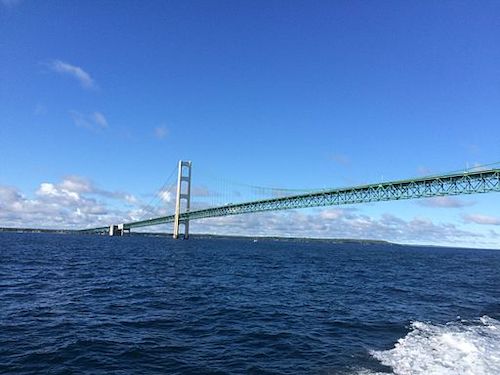 The 547-mile/880-kilometre line transports up to 540,000 barrels of light crude oil and natural gas liquids per day from Superior, Wisconsin, to Sarnia, Ontario. Nessel’s suit focuses on a 4.5-mile/7.25-kilometre stretch beneath the Straits, where it branches into two lines.

“The suit indicates Nessel has run out of patience waiting for Gov. Gretchen Whitmer, a fellow Democrat, to negotiate a settlement with the Canadian energy giant over the pipeline’s future,” Bridge Michigan reports. “The move fulfills Nessel’s vow to kickstart a shutdown if Whitmer could not agree—after months of negotiation—on an expedited plan to remove Line 5 from the lake bed.”

“The continued operation of Line 5 presents an extraordinary, unreasonable threat to the public because of the very real risk of further anchor strikes, the inherent risks of pipeline operations, and the foreseeable, catastrophic effects if an oil spill occurs at the Straits,” the AG said in a statement. She was referring in part to a mid-June incident in which an unmoored Canadian freighter dropped anchor near two pipelines in the Detroit River, a liquid ethane line owned by Texas-based Kinder Morgan and a propane pipe belonging to Plains Midstream Canada, raising initial concern that one of them might have been hit.

“I have consistently stated that Enbridge’s pipelines in the Straits need to be shut down as soon as possible because they present an unacceptable risk to the Great Lakes,” she added. “Governor Whitmer tried her best to reach an agreement that would remove the pipelines from the Straits on an expedited basis, but Enbridge walked away from negotiations and instead filed a lawsuit against the state. Once that occurred, there was no need for further delay.”

Nessel also filed a separate court action to dismiss Enbridge’s June 6 suit. “The company has asked that court to uphold a series of agreements made last year with Gov. Rick Snyder—Whitmer’s Republican predecessor—to replace the Straits pipelines and bury new lines in a bedrock tunnel expected to cost Enbridge US$500 million,” Bridge Michigan notes. “Enbridge disputes that it was unwilling to negotiate with Whitmer and said her administration’s insistence on shutting down the current pipeline in two years was a non-starter. Enbridge last month said it could finish a Line 5 tunnel by 2024 at the earliest, shaving years off its previous timeline.”

Bridge Michigan notes that “both Nessel and Whitmer campaigned on shutting down the pipeline, and they opposed the deal with the Snyder administration that was finalized during his final days in office.”

“We are disappointed the State chose not to accept our offer to advance talks on the Straits tunnel, a project that would make a safe pipeline even safer,” said spokesperson Ryan Duffy. “Line 5 is critical infrastructure that Michigan residents depend on every day, and it would be irresponsible to shut it down. It is safe and well maintained, and we intend to continue to operate it for decades to come.”

Michigan Environmental Council President Conan Smith called Nessel’s action a “step forward in the fight to protect our Great Lakes from the billions of dollars of damage that an oil spill would cause in the Straits of Mackinac.” He added that “Michiganders are fed up with the threat of an oil disaster in our precious lakes, and AG Nessel’s action is one piece of what is needed to end the threat of Line 5 for good.”