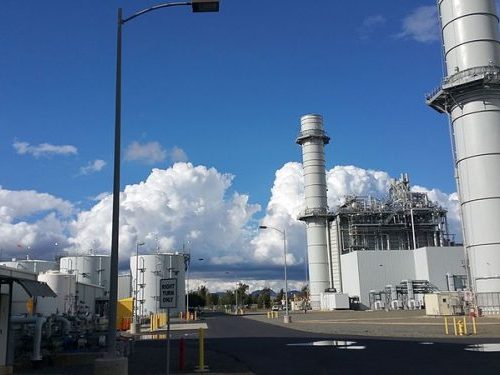 General Electric plans to close and demolish a 750-megawatt natural gas power plant in California 20 years ahead of schedule, after concluding it can’t compete with inexpensive solar- and wind-generated electricity.

“We have made the decision to shut down operation of the Inland Empire Power Plant, which has been operating below capacity for several years, effective at the end of 2019,” a company representative told Reuters. The plant “is powered by a legacy gas turbine technology…and is uneconomical to support further.”

“For renewable power advocates, this story is something else: GE loses almost US$200 billion by going all-in with fossil fuels. The company has to close a roughly $1-billion natural gas-fired plant 20 years earlier than anticipated,” the Electrek news site notes. “And to top it all off, the plant’s site will be used for battery energy storage in the future. It’s the clean energy transition, in microcosm.”

Last Thursday, the company told the California Energy Commission the plant was “not designed for the needs of the evolving California market, which requires fast-start capabilities to satisfy peak demand periods.”

“The closure illustrates stiff competition in the deregulated energy market as cheap wind and solar supply more electricity, squeezing out fossil fuels” to the extent that some utilities have no intention of building new fossil plants, Reuters reports. “It also highlights the stumbles of Boston-based GE with its first H-Class turbine. The complex, steam-cooled H design takes hours to start, suffered technical problems, and sold poorly.”

Citing the CEC filing, the news agency says the only other operating H-Class turbine is at a power plant in Wales.

GE opened the Inland Empire plant in 2009, six years after it received state approval and, as Electrek notes, it was supposed to run for 30 years. But the company shut down one of its two turbines in 2017, cutting the facility’s output to about 376 MW. Now, Reuters, the early closure “is a negative for GE as it struggles to restore profits at its power business,” which lost $22.8 billion last year due to “slack demand” for fossil-fired generating plants.

“GE is selling the California power plant site to a company that makes battery storage, which is increasingly used to make wind and solar power available when needed, replacing the need for some fossil fuel plants.”