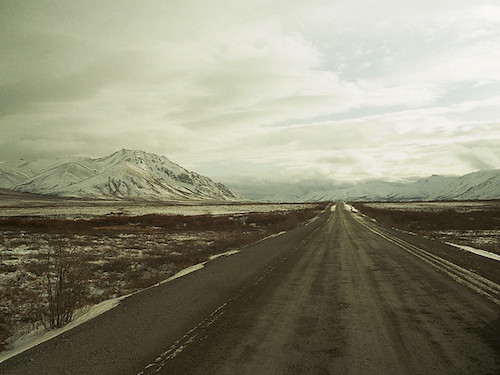 To truly earn the “We the North” slogan, Canadians everywhere—basketball fans and otherwise—need to understand—and come together to help prevent—the downright “hellish” changes that a warming climate is bringing to the Arctic and all of its inhabitants.

The startling appearance of starfish in Hudson Bay was least among the disorienting signs of a destabilizing Arctic, writes the Vancouver Sun, reporting on a recent meeting organized by the United Nations Association of Vancouver to discuss circumpolar issues.

“It’s like hell on Earth,” panelist Ruth Kaviok, a 20-year-old Inuk, told her listeners. “Honestly, we are seeing the effects of climate change every day. One day it’s raining. One day it’s snowing, then it’s raining again.”

Raising the very real spectre of food insecurity, Kaviok asked what subsistence hunters and fishers like herself are to do as sea ice loss increasingly hampers their ability to feed their families.

Canadian Junior Ranger Devon Billy-Freeman echoed Kaviok’s fears, reporting that all along the Yukon River, “she and her fellow rangers are seeing salmon dying because the water is no longer cold enough to kill the parasites that attack them.”

The same is true along the Mackenzie River, said John Nightingale, former CEO of the Vancouver Aquarium, and currently a director of Polar Knowledge Canada.

Southern Canadians need urgently to comprehend such frightening changes, writes the Sun, ever more so in the wake of a report last week out of the University of Alaska Fairbanks which found that permafrost melt rates are now 150 to 240% faster than a 1979-2000 baseline. What had been projected to become the state of Canada’s permafrost in 2090 is the state of permafrost today, in 2019.

With evidence of the North in peril, the Inuit Tapiriit Kanatami (ITK), which represents Canada’s 65,000 Inuit, released a report a few weeks ago, establishing its priorities for a national climate change strategy. Insisting “that all of the recommended measures be done only with the Inuit’s active participation and engagement,” the ITK report “sets five priority areas for action to meet ‘pressing adaptation, mitigation and resilience-building needs’ that include knowledge and capacity building, food security, health, energy, and infrastructure,” the Sun notes.

In the preface to the report, ITK President Natan Obed urges “nothing less than transformative actions” to address the climate crisis, adding that falling short will ensure “an unimaginably stark climate reality for my children and future grandchildren.”

“This is an emergency unlike any we have faced before, requiring all our shared strength and wisdom,” he writes.

While the report “makes sweeping recommendations,” the Sun notes, it also “emphasizes that the ultimate goal should be the devolution of decision-making powers to northern people and northern institutions.”

As to what the rest of us should be doing, the Sun’s Daphne Bramham finds sad irony in the fact that “for all the recent chanting of ‘We the North,’ the Arctic is terra incognita to most Canadians.” She reminds readers that the homeland for Canada’s Inuit, whom she calls the country’s “most resilient and optimistic citizens,” constitutes “nearly a third of Canada’s land mass and half its coastline.”