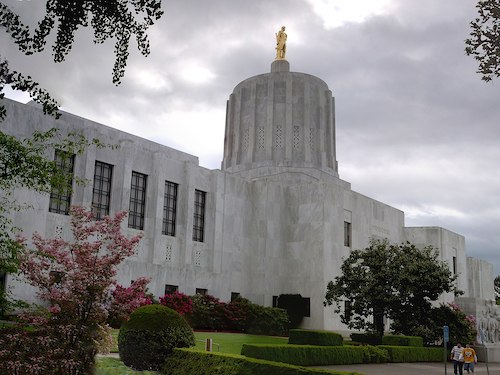 UPDATE June 26, 2019, 9:35 AM ET: After a six-day stand-off, the Republican minority in the Oregon state senate has defeated a carbon cap-and-trade bill championed by Democratic Governor Kate Brown, Oregon Public Radio reports. “What I’m about to say I say of my own free will. No one has told me to say this,” Senate President Peter Courtney said Tuesday. “HB 2020 does not have the votes on the Senate floor. That will not change.”

“His announcement earned instant condemnation from supporters of the cap-and-trade bill, which would have reduced greenhouse gas emissions by 45% of 1990 levels by 2035 and 80% of 1990 levels by 2050,” EcoWatch writes, citing the state broadcaster. “Those inside the gallery stood up and turned their backs on Courtney as he spoke.”

An Oregon senator promised violence against state police, threats from right wing militia shut down the state legislature, and a website using the “blue lives matter” slogan touted a crowdfunding campaign supporting the renegade legislators over the local constabulary, after Democrats tried to pass a carbon cap-and-trade bill introduced by Governor Kate Brown.

Rather than allowing the senate to convene and the Democratic majority to pass the bill, Republicans bolted for the state border, beyond the reach of the law. Latest reports had them taking refuge in Idaho, Montana, and Washington State.

“We will not stand by and be bullied by the majority party any longer,” Senate Republican Leader Herman Baertschiger, Jr. said in a statement. “Protesting cap-and-trade by walking out today represents our constituency and exactly how we should be doing our job.”

“Send bachelors and come heavily armed,” Sen. Brian Boquist warned a state police superintendent. “I’m not going to be a political prisoner in the state of Oregon. It’s just that simple.”

“We strongly condemn the comments made this week in the Oregon State Capitol by Sen. Brian Boquist, threatening lawmakers and Oregon State Police troopers,” House Speaker Tina Kotek responded in a statement. “Law enforcement officers put their lives on the line every day in the name of protecting Oregonians and should never be subject to these kinds of threats, let alone from a public official.”

“His comments have created fear among employees in our workplace,” she added. “We will always defend free speech and welcome frank policy discussions, but threats like these are unacceptable.”

But other members of the Republican minority appeared unbowed and unashamed.

“We do our jobs best when we represent our constituents best, and that means doing everything in our power to keep them from being irreparably damaged, which this bill will do,” added Sen. Cliff Bentz.

“House Bill 2020 institutes a carbon tax, and the result of that is a massive gas tax increase of about 22 cents a gallon,” said State Sen. Tim Knopp. “It makes us uncompetitive in manufacturing and we will lose thousands of manufacturing jobs.”

The intense standoff ensued after the state assembly passed the bill and forwarded it on for a vote in the senate. Democrats hold majorities in both bodies, but in the senate, they need at least two Republicans present to make quorum. So “the Republicans, facing down a Democratic supermajority bent on passing bills to combat climate change, resorted to some last-ditch political arithmetic: no senators, no votes,” the Washington Post explains.

“It is absolutely unacceptable that the Senate Republicans would turn their back on their constituents who they are honour-bound to represent here in this building,” Brown said late last week. “They need to return and do the jobs they were elected to do.”

Brown authorized state police to track down the absent senators and drive them back to the state capitol in patrol cars. The police department said it would opt instead for “polite communication”. That was about the time that Boquist issued his violent threat.

“Critics of the cap-and-trade bill vigorously oppose it because they say it will have a disproportionate and detrimental effect on Oregon’s rural communities,” the Post says. “Under the plan, greenhouse gas emissions would be limited and carbon-producing businesses would be required to purchase pollution credits. Over time, the state would decrease the number of credits available, thereby lowering the level of emissions allowed.”

But “those against the legislation argue that industry will likely pass the extra cost on to consumers, and the price of fuel would rise, putting a strain on industries like trucking and logging.”

The Post recounts past incidents when Democrats in Texas and Wisconsin and Republican senators in Washington, DC pulled similar stunts. But this may have been the first time that right wing extremists got into the act, issuing threats that shut down the state legislature Friday.

“State Senate President Peter Courtney (D) told his colleagues on Friday that Oregon State Police had informed him there was a credible threat to him, the rest of the remaining senators—all of whom are Democrats—and the building’s staff,” the Post reported Friday. “State police confirmed the danger in an emailed statement,” after militia groups announced a rally in support of the 11 Republican senators.

“It was obviously a credible threat because Sen. Courtney wouldn’t close it down for no reason,” said spokesperson Carol Currie.

“We have been monitoring information throughout the day that indicates the safety of legislators, staff, and citizen visitors could be compromised if certain threatened behaviours were realized,” wrote state police captain Timothy Fox.

Mother Jones warned Friday that the cap-and-trade protest had drawn in the Oregon chapter of the Three Percenters, a “paramilitary group known for anti-government and pro-gun sentiment”. In a Facebook post Thursday night, the group vowed it would “stand together with unwavering resolve, doing whatever it takes to keep these Senators safe.” It promised “security, transportation, and refuge” for the 11 Republicans.

“The Senators are not with any militias and are not accepting their help,” replied Senate Republican spokeswoman Kate Gillem.

“That’s in the talks right now,” he said. “Where that goes I have no idea.”

But meanwhile, a columnist for Esquire pointed to a moment of “insanity” in which “people with guns have involved themselves in a legislative dispute while the officials of one political party cheer them on”. Media Matters for America reported further calls for violence from a pro-Trump subreddit. And weirdly, a website purportedly devoted to “blue lives” was amplifying a crowdfunding campaign aimed at covering costs for the renegade senators issuing threats against state police.

“While liberal cities like Portland are wildly in favor of the climate change legislation, the rest of the state, whose businesses are actually impacted by the new law, having been fighting it desperately,” the site stated.