RCMP Has ‘Army’ of Officers to Protect B.C. Pipeline, No Time to Investigate Murdered Indigenous Woman 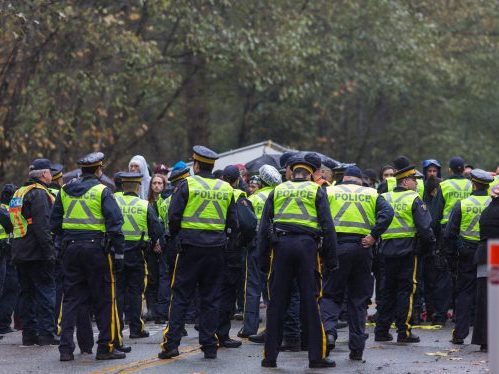 Nine months after Patrick’s body was found on a roadside embankment outside Smithers, her family is “still waiting for answers,” reports The Tyee, even as “the equivalent of 16 full-time officers” are six months into their tenure at a “Community-Industry Safety Office” (C-ISO) some 100 kilometres to the southeast.

Established by the RCMP after heavily militarized officers broke up a peaceful protest near the Unist’ot’en Healing Centre, a traditional hunting camp first reoccupied in 2010 to protect Wet’suwet’en lands from uninvited guests, the official purpose of the new office was “to ensure the safety of the individuals at the Healing Centre and of CGL employees.”

But that language doesn’t sit well with Wet’suwet’en hereditary chief Na’Moks. “They’ve put more money into watching us, labelling us, and monitoring us than into searching for local murdered and missing women,” he told The Tyee. “They’re out there 24 hours a day, seven days a week, and they’re not helping our people.”

Dylan Mazur, a community lawyer with the B.C. Civil Liberties Association, concurred, observing that “northern B.C. communities often complain they are ‘over-policed and under-protected,” a judgement borne out by a 2017 Civilian Review and Complaints Commission report on the state of policing in the region.

The Commission found that northern detachments had failed to investigate 46% of missing persons cases “promptly and thoroughly” as per RCMP policy. Furthermore, reports The Tyee, “almost half—49.4 %—of missing cases for people labelled ‘high-risk’ weren’t properly investigated.”

Molly Wickham of the Gidumt’en Clan of the Wet’suwet’en Nation, who has regular interaction with the posted officers, decried the RCMP’s massive deployment in defence of industry interests. “It’s really an abuse of their power and an abuse of the resources that are needed elsewhere, like searching for missing women,” she said. “It’s a slap in the face to any family in our community that is trying to find their loved one.”

Wickham, who was one of 14 protesters arrested by heavily-armed RCMP officers in early January, spoke of ongoing harassment by C-ISO officers, from regular ticketing for minor infractions like cracked windshields, to filming Indigenous people without their permission, including Elders engaged in spiritual practices like medicine walks.

RCMP media relations officer Cpl. Madonna Saunderson said officers have shown no bias, responding “to calls from people on all sides of the dispute.” She added that all officers assigned to the C-ISO “have undergone cultural awareness training provided by Elders, including a clan chief, on the Wet’suwet’en traditions.”

What is undeniable, writes The Tyee, is that the RCMP’s presence will ensure the pipeline proceeds, “bringing camps that house hundreds—perhaps thousands—of workers from outside the region.”

What is also undeniable is the danger these camps pose to Indigenous women.

In a chapter detailing the harrowing connection between resource extraction projects and violence, reports The Tyee, the recently-published final report of the National Inquiry into Missing and Murdered Indigenous Women and Girls confirmed that “man camps” filled with transient workers are to be deeply feared.

The marked increase in drug and alcohol abuse, domestic abuse, and sexual violence “is largely the result of the migration into the camps of mostly non-Indigenous young men with high salaries and little to no stake in the host Indigenous community,” the report concludes. It adds that parties responsible—resource companies and governments—“should do a more thorough job of considering the safety of Indigenous women and children when making decisions about resource extraction on or near Indigenous territories.”

In the meantime, Jessica Patrick’s family and friends mourn her death, and wait for news, still without confirmation of her cause of death, after nine months of asking.