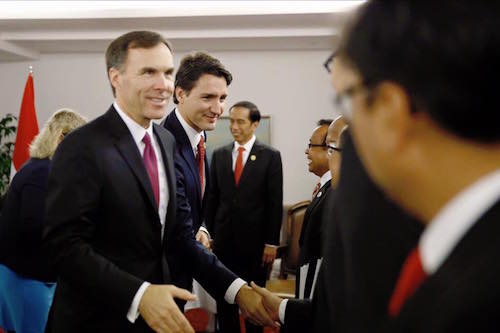 Finance Minister Bill Morneau acknowledged Alberta’s anxieties over the post-carbon transition in a breakfast speech to the Economic Club of Canada in Calgary Wednesday, less than 24 hours after the Trudeau government confirmed its re-approval of the controversial Trans Mountain pipeline expansion.

“That challenge is exacerbated in Alberta where, when we talk about a shift to a low-carbon future, it equals a real challenge to the sector that has created so much prosperity here, it seems like it’s a direct challenge to that sector,” he said. That’s particularly true at a time of deep anxiety, growing income disparity, and stress—in the province, and across the country.

“There’s an increasing level of frustration, and it’s not just impacting small pockets of our population,” Morneau added, citing the rise of right wing populism around the world as a threat to “our pluralistic, inclusive society”.

Earlier, in an interview with CBC Calgary’s Eyeopener morning show, he said governments have to do more than one thing at a time to simultaneously address climate change and build a strong economy. “We know, and certainly people in Alberta know when they see the fires that are going on here, and people in Eastern Canada know when they see the floods, we know that there’s an enormous challenge going on with climate emergencies. We need to recognize that.”

Later in the day, the Trans Mountain decision received a boost from Ed Whittingham, the former Pembina Institute executive director appointed to the Alberta Energy Regulator by Rachel Notley’s NDP government, then hounded out of the position by Jason Kenney’s United Conservative Party.

“I think Ottawa made the right decision,” Whittingham told CBC. “I think TMX has been a very polarizing issue, and I think many in Canada and Alberta would agree, and it’s been portrayed as an either-or proposition.” But “it’s going to create some of the financial capacity we need to make those investments, to retool our companies and our economy so we’re competitive in a low-carbon economy.”

As for the staunch opponents in British Columbia preparing for the next round of the campaign to stop the pipeline, “I’d invite them to come to Alberta and say Albertans are trying their best to turn this ship around, to ensure our energy resources are competitive in a global, low-carbon economy,” he said. “It’s tough to do that when you can’t make your mortgage payments.”