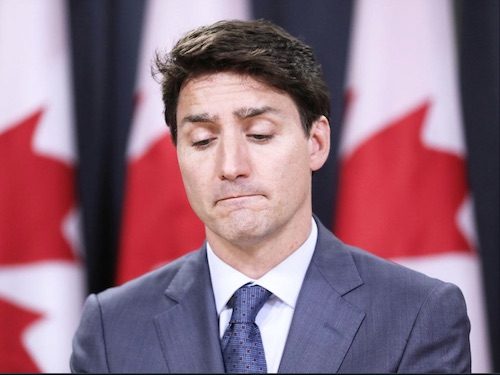 In a move condemned by critics as the height of cynicism, Prime Minister Justin Trudeau and several senior cabinet ministers announced re-approval of the C$9.3-billion Trans Mountain pipeline expansion Tuesday afternoon, not 24 hours after their government pushed a climate emergency resolution through the House of Commons.

The announcement was greeted by a flood of criticism from fossil interests that fought so hard for the decision but seemingly refused to take the win, and immediately triggered the first of what might be a series of new lawsuits against the project.

“The federal government’s decision to buy the pipeline and become the owner makes it impossible to make an unbiased, open-minded decision,” said Chief Leah George-Wilson of the Vancouver-area Tsleil-Waututh First Nation. “After consultation with our community and our council, we will be appealing this decision to the Federal Court of Appeal.”

“This is like declaring war on cancer and then announcing a campaign to promote smoking,” said Patrick McCully, energy program director at the Rainforest Action Network. “But this is far from a done deal. First Nations and Canadian environmentalists will continue to fight this project, and their international allies will support them in whatever way they can.”

“The federal government has signed off on as much as an additional 15 million tonnes of carbon,” said Environmental Defence Executive Director Tim Gray. “This is irresponsible at a time when Canada is drifting further away from meeting our Paris climate commitment, and inconsistent with the climate emergency that was declared only yesterday.”

“The reality is that the government can put Canada on the path to a safe climate future and fulfill its legal responsibility to protect endangered killer whales, or it can push this pipeline through. It cannot do both,” said Ecojustice Nature Director Margot Venton.

There may be at least one youth constitutional challenge in the offing, as well.

With the widely-expected decision, the federal cabinet “affirmed the National Energy Board’s conclusion that, while the pipeline has the potential to damage the environment and marine life, it’s in the national interest and could contribute tens of billions of dollars to government coffers and create and sustain thousands of jobs,” CBC reports.

“Beyond approving the project, Trudeau also committed to directing every single dollar the federal government earns from the pipeline—which, when it’s built, is estimated to be some $500 million a year in federal corporate tax revenue alone—to investments in unspecified clean energy projects,” the national broadcaster adds. “Any proceeds from the eventual sale of the pipeline will also be earmarked for projects that would help with the transition away from fossil fuels to cleaner sources of energy.”

The PM repeated the frequent claim that Canada needs access to oil markets in Asia to balance out the United States as its only major buyer for oil. “As we’ve seen over the past few years, anything can happen with our neighbours to the south,” he said. “Right now, we’re prisoners to the American market.”

CBC says the government is open to selling up to 100% of the project to First Nations, Métis, or Inuit buyers, and will soon begin meeting with potential investors. Meanwhile, despite the remaining permits and regulatory hurdles facing the pipeline, and the certainty of new legal challenges, a federal official said pipeline construction would start sometime this year.

“There’s six months left in 2019 and I think it’s fair to say shovels will be in the ground in 2019,” the official said, speaking on background. “Plans are being drafted up, regulators are ready to move forward.”

Alberta Premier Jason Kenney immediately called for an aggressive construction schedule. “This second approval of the Trans Mountain pipeline isn’t a victory to celebrate, it’s just another step in a process that has frankly taken too long,” he told media. “And that’s why we’ll measure success not by today’s decision, but by the beginning of actual construction, and more importantly, by completion of the pipeline.”

Provincial opposition leader Rachel Notley said she hoped Kenney’s United Conservative Party would be able to hold onto the support for the project her previous New Democrat government worked to create. “My concern is that the UCP’s plan to attack all that is environmentalist will actually potentially reverse the support we were able to grow for this project in B.C.,” she said. “Instead of focusing on anger and division, they need to continue to build the consensus that we have been successful in building over the course of the last four years.”

British Columbia Premier John Horgan acknowledged Ottawa’s authority to approve the project and said he would focus on protecting his province from the potentially devastating impact of an oil spill [or tank farm fire—Ed.]. “I believe it’s my job as the premier of British Columbia to always be vigilant to protect those things that matter to British Columbians, and I’ll continue to do that,” he said.

“We know that British Columbians continue to be deeply concerned about the consequences of a seven-fold increase in tanker traffic in the Salish Sea,” added B.C. Environment Minister George Heyman. “We will not abandon our responsibility to protect our land and our water.” Vancouver Mayor and former federal MP Kennedy Stewart, who spoke alongside coastal Indigenous leaders opposed to the project, said the city would do “everything in our power” to support local First Nations in court.

Federal NDP leader Jagmeet Singh “added his voice to the chorus of opposition,” CBC says, while Green leader Elizabeth May called the promise to reinvest Trans Mountain proceeds in clean energy projects a “cynical bait-and-switch that would fool no one.”

“If you’re serious about fighting climate change, you invest public funds in renewable energy. You don’t invest them in a bitumen pipeline,” May added. “And there’s no guarantee that this pipeline will ever turn a profit, anyway.”

The final outcome of the government’s re-approval process “was essentially a foregone conclusion”, CBC says. But it wasn’t clear whether cabinet would attach new regulatory conditions to the project, after hiring retired Supreme Court justice Frank Iacobucci and a team of 60 consultants to consult Alberta and B.C. First Nations and Métis on ways to mitigate the pipeline’s impact.

An official said that led to the “unprecedented” decision to strengthen six of the 156 conditions the National Energy Board (NEB) had attached to the project and add eight new “accommodation measures” to address Indigenous concerns. The net result, from Ottawa’s point of view: stronger marine and emergency response plans with a more robust Indigenous role, a Salish Sea Initiative to reduce the impact of increased tanker traffic on the threatened orca population off the west coast, and a Quiet Vessel Initiative to reduce noise pollution.

Now, the Crown corporation that owns the project “will have to work with the NEB to finalize the project’s route through a series of regulatory hearings” CBC writes, and “the possibility of further litigation from environmentalists and First Nations is always a risk.”

In his announcement, Trudeau promised shovels in the ground this summer, but even that wasn’t enough for opposition leader Andrew Scheer. “I doubt his sincerity because he hasn’t actually done anything,” Scheer said,” complaining that the PM “failed to tell Canadians on what day construction would actually start.”

Richard Masson, a fossil-aligned executive fellow with the School of Public Policy at the University of Calgary, welcomed the announcement but took a more realistic view of the path ahead. “It’s a long ways from an approval to a completed pipeline,” he said, noting that opponents could point to the federal government’s conflict of interest in approving a pipeline it owns, or argue that Indigenous consultations were inadequate.

Former Alberta cabinet minister Gary Mar, now president of the Petroleum Services Association of Canada, complained Ottawa had “created further roadblocks for itself by declaring a climate change emergency the day before the approval was announced,” CBC writes.

“It remains to be seen whether they’ll have the commitment necessary to make sure this project goes through to completion,” Mar said. “I won’t be optimistic until I see it constructed.” The Canadian Association of Oilwell Drilling Contractors actually called Trudeau’s decision “trivial” compared to two new pieces of legislation, Bills C-48 and C-69, due to be adopted by Parliament this week. “This industry is on life support,” said President and CEO Mark Scholz. “Today’s announcement does little to provide future certainty to drilling and service rig contractors as they continue to exit the Canadian market at an alarming rate.”

In other words, we need to destroy the environment in order to protect it.

Trudeau does not seem to understand the basic science behind climate disruption: emissions are cumulative. The more GHG emissions come out of the end of that pipeline, the more CO2 in the atmosphere for the next couple centuries and the more rapid and drastic (and painful) emissions reductions must become in order for our planet to remain anything close to an inhabitable home.

“sustain thousands of jobs,” Kinder Morgan said in their own report, 50… 50 full time jobs once the pipe is built. 50 poison / pillage jobs would be allowed to threaten tens of thousands of real sustained jobs in BC alone.
When you build pipe-dreams on the promises of liars, you are settling yourself up for disappointment.
Kinder Morgan could not secure a single buyer for it’s dream when it pawned off it’s 65 year leaky one to Canadian taxpayers for NINE times it’s value when they bought it 10 years prior.. when it had a market.

Since these “unconventional fossil fuels” already usurp 7.8% out of BC’s otherwise strong GDP on a good day (Stats Can – BIV) there really is #NoMoreExcuses to prop up this antiquated and unnecessary social, ecological and economic pariah.

We do not need to create wealth using petroleum but using solar and wind power, you tweet. To be healthy all you need is clean air and clean water ALL THE TIME!