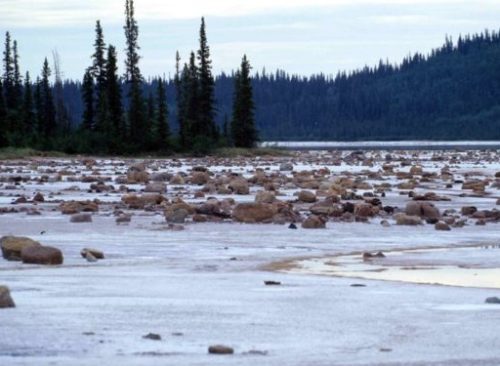 A UN agency is on the verge of placing Wood Buffalo National Park, Canada’s largest, on the World Heritage in Danger List, and urging the country to take far more strenuous measures to protect the territory and its extraordinary biodiversity.

In a draft decision, UNESCO determines that Wood Buffalo is imperiled by the triple threat of upstream resource development, climate change, and a federal government negligent in its duty to protect, The Canadian Press reports.

“Considerably more effort will be needed to reverse the negative trends at a time when climate change, combined with upstream industrial developments and resource extraction, are intensifying,” the draft states. It adds that further erosion of its ecosystems, including the vast Peace-Athabasca Delta upon which many Indigenous communities and millions of migratory birds depend, “could eventually lead to the inscription of the property on the list of World Heritage in Danger.”

With its “almost 45,000 square kilometres of grasslands, wetlands, and waterways” stretching across the Alberta-Northwest Territories boundary, Wood Buffalo is “the world’s only breeding ground for endangered whooping cranes and home to the world’s largest herd of free-ranging wood buffalo,” CP states. Millions of other migratory birds make their way to the delta to breed via four continental flyways.

With a final ruling expected this summer, the draft decision is the latest installment in a saga which began in 2014. That’s when the Mikisew Cree First Nation, concerned about the loss of ecological integrity throughout the region, asked UNESCO, which oversees the UN’s list of World Heritage Sites, to review Wood Buffalo’s status.

The agency’s initial, unsettling assessment, issued in 2017, galvanized Ottawa to produce a study which confirmed the fears of the Mikisew, and UNESCO’s own judgement, CP notes. The combined effects of watershed damage due to established dams in British Columbia, tar sands/oil sands development in Alberta, and climate change have left “15 out of 17 measures of ecological health” in decline.

Responding to UNESCO’s call for a federal action plan to redress Wood Buffalo’s deterioration, Canada “proposed solutions such as artificially-induced spring floods and other water flows,” and “promised more careful environmental reviews of nearby development and better consultation with local Indigenous people,” the news agency recalls. The Alberta government also responded to the UNESCO report, constructing a buffer zone of wildland areas around much of the park.

While the draft decision “praises those measures, including the controversial Bill C-69 on environmental assessment,” it takes Canada to task for failing to address concerns about the impacts of British Columbia’s mammoth Site C dam on the park.

Commenting on Parks Canada’s commitment of more than $27.5 million over the next five years for federal action at Wood Buffalo, UNESCO wrote that “more funding will likely be needed given the size of the property and the complexity of the issues.”

“It’s definitely not a real passing grade,” she told CP. “The continuation of adding a small impact here, a small impact there, [has] already overwhelmed the park. It will require some tough decisions and actually saying no to some projects.”