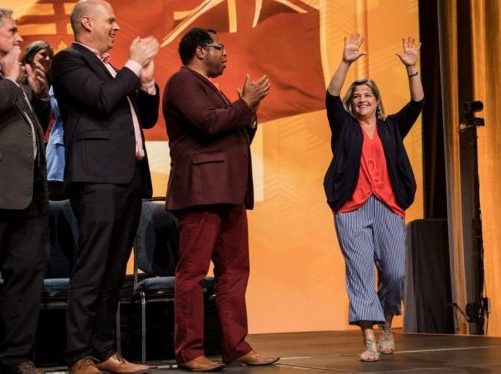 Ontario would move toward a net-zero carbon economy by 2050 under an as-yet uncosted plan released by New Democrat leader Andrea Horwath during her party’s annual convention last Saturday in Hamilton.

“If we do it right, we will create more than a million jobs, and billions of dollars in economic activity,” she said.

iPolitics says the plan “got some of the loudest cheers” during Horwath’s speech to more than 1,500 convention delegates.

“The party says its plan to reach a net-zero economy in Ontario isn’t finalized but there will be one before the 2022 election, along with a price tag,” the online publication notes. To hit the target, “Ontario will need to slash greenhouse gas emissions in half by 2030, before reaching zero emissions in 2050.”

“Funding the Green New Democratic Deal will require a combination of new revenue streams, fair carbon pricing, lending, and borrowing,” the policy document states. “Ontario will put an end to austerity and ensure that every financial resource needed to invest in a just, sustainable future is made available.”

Horwath didn’t indicate how a New Democrat government would pay for the plan, but said it wouldn’t necessarily mean raising taxes. “On the contrary, there are many different types of carbon pricing plans and many different ways to achieve that,” she told media. “We are going to have that difficult conversation that I think we need to have,” she added, noting that the cost of doing nothing would be “untenable”.