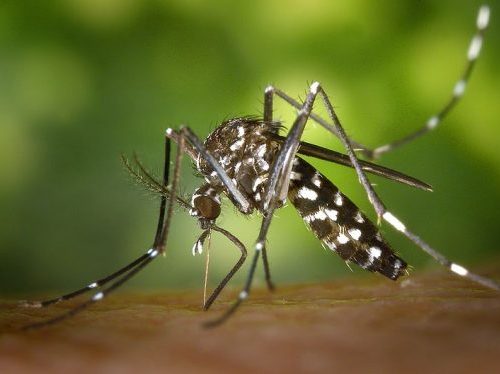 Based on a warming scenario “roughly representative of the world’s current emissions trajectory,” more than two billion additional people will be at risk of dengue fever by 2080, within its current geographic range and well beyond, according to a study just published in the journal Nature Microbiology.

“Worldwide each year, there are 100 million cases of dengue infections severe enough to cause symptoms, which may include fever, debilitating joint pain, and internal bleeding,” reports the New York Times. Some 10,000 of these cases will prove fatal, with infants, the elderly, and the infirm most likely to die from the illness transferred by the bite of an Aedes aegypti mosquito. With a particular taste for human blood (unlike other mosquitoes which are less fussy), Aedes is also the carrier for the Chikungunya virus and Zika fever.

While much of the increase will “come from population growth in areas already at high risk for the disease,” like Brazil and India, the study “found a likelihood for significant expansion of dengue in the southeastern United States, coastal areas of China and Japan, as well as to inland regions of Australia.”

To estimate the future spread of the disease, researchers “took data on mosquito behaviour and projections on urbanization (one type of Aedes mosquito that spreads the disease is especially prevalent in cities) and combined them with three different climate scenarios to model what might happen in 2020, 2050 and 2080,” the Times explains.

Though dengue spread under all three scenarios—since any degree of warming will expand the range of the heat-loving insect, while shortening the time it takes to grow into an infectious adult—their research “hints at the idea that if we do control emissions better, we could stop or at least limit” its progress, said study co-author Oliver Brady, an assistant professor at the London School of Hygiene and Tropical Medicine.

“While there is a dengue fever vaccine, it is ineffective for most people,” the Times adds. So “treatment for the disease focuses on ensuring that the patient gets enough fluids, which can be difficult because of severe nausea and vomiting.”