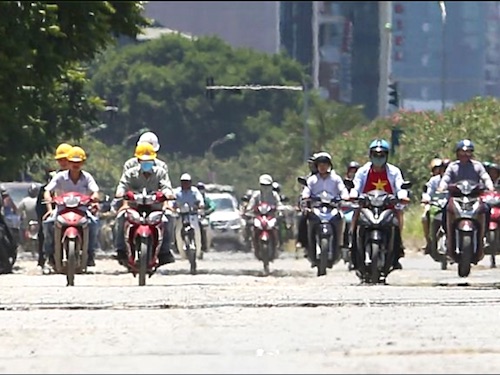 After seeing the climate crisis crash into the two places she calls home, Vietnam and Ottawa, Our Time Ottawa organizer Vi Bui is pushing for Canada’s Green New Deal and calling for a leaders’ debate on climate during the federal election this fall. Reprinted in full with permission.

I was born and raised in Vietnam, and spent most of my childhood in Ho Chi Minh City, the economic hub in the south of the country. I grew up following my mom, an agricultural expert, to rice fields, farms, and gardens, where she taught me the names of every shrub, grass, and tree. To us, nothing was a weed, each and every plant has a name, a role, and a neat thing about them. My dream was to travel around the world, see every natural landscape and know the story behind every species. To me, knowledge is love, and knowledge is power.

My dream hit reality hard when, at 15, I first learned about climate change. As Al Gore closed out An Inconvenient Truth, his voice still echoed in my head as I sat alone in my dark living room thinking:

“This is not a political issue; it’s a moral issue. How could it be anything but a moral issue when my own city and the entire Mekong Delta, the rice-growing region that feeds the rest of Vietnam, will be underwater as sea level rises? How is the survival of every person, species, and ecosystem not the political priority of every decision-maker?”

I started frantically turning off every light bulb and turning away every bottle of water, worried it wasn’t enough to stop sea level rise from destroying my hometown.

I went on to study climate change impacts on different plant communities, from Antarctic grasses to poplar trees, from Floridian grasslands to Canadian bogs. As a scientist, every day was a new revelation of how climate change is devastating to humanity and biodiversity alike. The more I learned, the more I braced myself for news of another super-typhoon, like Typhoon Haiyan, hitting Vietnam. Yet, even the most well-intentioned politicians failed to acknowledge the problem, let alone bring forward the ambitious and bold solutions needed to address the climate crisis. For the first time in my life, knowledge was no longer power, but a debilitating, paralyzing curse. It felt like I was watching a runaway train hurl full speed towards me and there was nothing I could do to stop it.

In April this year, that proverbial train crashed not once, but twice into two of the places I call home. Vietnam saw record high temperatures right outside where my grandparents live at the beginning of the summer. My family was fortunate enough to hide out in an air-conditioned home, but most other Vietnamese didn’t have that luxury. Hospitals across the country filled up with children and elders suffering from heat stroke, while others had to work through the unbreathable hot air and cancer-inducing radiation. At the same time, my new home in Ottawa saw a once-in-a-100-year flood for the second time in the last three years. Hundreds of homes along the Ottawa River were destroyed, families were evacuated, while thousands of others anxiously waited for the water to recede.

Helpless against the climate impacts back home, I pulled myself together to come help fill sandbags in Ottawa. It was beautiful to see thousands of people from all across Ottawa come out in droves to help their neighbours in need. The military was also deployed to support the flood relief efforts. As I watched heavy military vehicles roll by, I wondered who would be there for my people in Vietnam? I still wonder, when we see 10 major typhoons every year instead of five, as floods turn rice fields into rivers, and as heat waves take so many lives that people stop keeping count, who will help us fill sandbags when sea levels rise and salt intrusion puts the Mekong Delta, the fertile agriculture and aquaculture cradle that nurtures all Vietnam, underwater?

The IPCC report released last fall gave us 12 years to cut global emissions in half to avoid the worst impacts of the climate crisis. Exxon knew about climate change 40 years ago, and the science has been settled for at least three decades. We knew about climate change for at least 30 years, and had we started acting on climate even 12 years ago, when I first learned about it, my community in Vietnam would really have a fighting chance at a livable future.

This isn’t science fiction. The rice farmers that my mother works with are losing their livelihoods as saltwater creeps into their fields. How do we explain to these farmers, and the millions of people across the Global South whose lives and livelihoods will be devastated by climate impacts, that to our politicians, their lives matter less than fossil fuel industry profits?

We can’t, but for the first time, I know that I am not facing the runaway climate train alone. The transformative change that we need to tackle climate change head-on means we need to change everything. The Green New Deal for Canada is the first climate plan that acknowledges the scientific evidence and proposes solutions in line with what this crisis demands. More importantly, it proposes we solve this crisis without leaving anyone behind: not my country in Vietnam, not oil and gas workers, not Indigenous and marginalized communities at the frontline of the climate struggle, not migrants and refugees fleeing their war-torn, climate-driven conflicts.

After living in Canada for six years, I still can’t vote. As the most privileged of immigrants who came here with a study visa, I still don’t have a voice in our political system, let alone the thousands of refugees and migrants in Canada facing horrific working and living conditions while being villainized by a toxic narrative. As millions more will be driven from their homelands due to climate change, the fight for climate justice cannot be separated from justice for migrants and climate refugees.

I’m inspired and motivated to see young people at the heart of the push for a Green New Deal fighting for a future in which we not only survive, but thrive. Young people are walking out of classes, skipping school and sitting in offices to demand climate actions that give us a fighting chance. For too long, politicians have turned a blind eye and put profit before people. Well, their time is up. Now, it’s our time to lead and demand nothing less than a livable future.

This upcoming federal election, and every one after that, is critical in the fight against the climate crisis. We are standing at a crossroads, and we have the power to choose to keep the people and places we love above water. We have the power to build a future that is vibrant and beautiful, to pull back species from the brink of extinction, to right our wrongs with Indigenous peoples, and lift everyone up in the process. I can’t vote this federal election, but I hope you will. That starts with demanding a federal leaders’ debate on climate change and Canada’s Green New Deal.