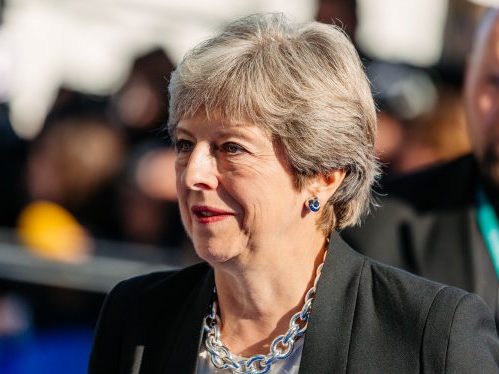 Soon-to-depart Prime Minister Theresa May has unveiled legislation to make the UK the first G7 country to enshrine a 2050 net-zero carbon deadline in law, with a plan that has taken fire from analysts and activists for its reliance on international carbon credits and yet-to-be-proven “negative emissions” technologies.

“Ending our contribution to global warming by 2050 can be the defining decision of this generation in fulfilling our responsibility to the next,” May wrote, in a letter confirming the target.

“Now is the time to go further and faster to safeguard the environment for our children,” she added in a prepared statement. “Reaching net zero by 2050 is an ambitious target, but it is crucial that we achieve it to ensure we protect our planet for future generations.”

Carbon Brief is out with a detailed explainer on the plan.

“Britain’s existing target is to cut greenhouse gas emissions by 80% from 1990 levels by 2050,” Reuters explains. “The new target is in line with the 2015 Paris climate agreement, which calls on countries to reduce carbon emissions to net zero by mid-century to try to keep the global temperature rise as close to 1.5°C as possible.”

Last week, “May, who is due to step down this summer after her political career became a casualty of the turmoil over Brexit, said legislation would be put before parliament on Wednesday to incorporate the new target” to the country’s existing Climate Change Act, the news agency adds.

That procedure means no parliamentary vote will be needed to cement the change, The Guardian reports.

But the surrounding politics might not be so easy. Last week, the Prime Minister’s office at No. 10 Downing St. “dismissed claims from the chancellor, Philip Hammond, that such a target would cost £1 trillion and could thus require spending cuts to public services,” The Guardian states. “Environmental groups welcomed the goal but expressed disappointment that the plan would allow the UK to achieve it in part through international carbon credits, something Greenpeace said would ‘shift the burden to developing nations’.”

While May accepted the net-zero by 2050 goal from her country’s independent Climate Change Committee (CCC), she “rejected its advice on international carbon credits, whereby a country can pay for cuts elsewhere in lieu of domestic emissions,” The Guardian notes. “John Gummer, the CCC chair, said last month it was ‘essential’ that such credits were not used.”

Greenpeace UK Chief Scientist Doug Parr said May’s announcement was “a big moment for everyone in the climate movement,” and a legacy the departing PM could be proud of. But “trying to shift the burden to developing nations through international carbon credits undermines that commitment,” he added. “This type of offsetting has a history of failure and is not, according to the government’s climate advisers, cost-efficient.”

“Fiddling the figures would put a huge dent in our ability to avoid catastrophic climate change,” agreed Friends of the Earth UK.

In its report last month, the CCC called for the country to reach net-zero with “sweeping changes in energy, transport, and agriculture,” Reuters says. “For example, new petrol and diesel cars might need to be phased out by at least 2035, the committee said. Households would also need to be weaned off natural gas heating and switch to low-carbon alternatives.”

And “although the new target has cast Britain as a relative climate leader, the government’s decisions to back projects such as a third runway at London’s Heathrow airport and fracking have raised questions about the depth of its commitment.”

Just a week before May’s announcement, the opposition Labour Party accused the government of “actively dismantling” the country’s rooftop solar industry, after a subsidy cut in April led to a 94% drop in new installations.

Extinction Rebellion calls the net-zero plan a “death sentence”, noting that “the 2050 target is based on spending just 1-2% of GDP to decarbonize our economy” by mid-century.

“That’s not an emergency response. Is that really all we are prepared to invest in protecting our futures from calamity?”

While climate scientist Kevin Anderson at the UK’s Tyndall Centre for Climate Change Research says he welcomes the “headline framing” in May’s announcement, he’s far less pleased with the details, noting that a true decarbonization plan would mean a 2035 net-zero deadline, not 2050.

“Although on the one hand the government’s ‘net-zero’ proposal is for the UK to make its ‘fair’ contribution to delivering on the Paris Agreement, on the other it is recklessly pursuing UK shale gas (an energy source that is 75% carbon by mass!),” he writes. “Moreover, it recently celebrated both BP’s new Clair Ridge oil platform, with its accompanying quarter of a billion tonnes of carbon dioxide, and the new Glengorm gas field, adding a further 100 million tonnes of CO2. To top it all, they plan to expand Heathrow, facilitating more flights with more fossil fuel consumption and hence more carbon emissions (even with efficiency improvements across the sector).”

He adds that May’s plans to reduce greenhouse gas emissions “rely in large measure on future and highly speculative Negative Emission Technologies” that “exist, at best, as small pilot schemes, and often only in the imagination and computers of professors and entrepreneurs. So in reality we are passing the buck on to our children to invent and deploy technologies to suck the CO2 out of the air that we choose to continue to emit today.”

He adds that international credits to support decarbonization efforts in developing countries “are necessary to meet the Paris Agreement’s climate commitments, but not as a means for permitting the UK’s ongoing emissions. With the UK’s world-leading renewable energy potential, we should be making the reductions ourselves, not paying others to do it for us.”

The plan would allow aviation to consume about one-third of the country’s “Paris-compliant carbon budget”, he added, “putting still further mitigation pressures on schools, hospitals, and businesses to compensate for this privileged sector.” And the country’s presumed carbon budget as a whole “is far higher than any defensible quota. So the UK not only has significant responsibility for historical emissions, but it is planning to take a disproportionately large slice of the remaining global carbon pie; colonialism thriving in 2019!”

The new target did earn some praise.

“It has crucial importance in terms of the timing,” said Laurence Tubiana, a former French climate ambassador and one of the architects of the Paris Agreement. “It is a very important signal within the G7 countries that a country decided to do this at the highest level.”

“It’s momentous,” University of Edinburgh carbon management professor David Reay told Reuters. “Achieving net zero by 2050 will change all our lives. It will transform the ways we travel, the homes we live in, and the food we eat.”

“The message from business is clear: the UK will strengthen the competitiveness of its economy by being the first major economy to legislate an ambitious net-zero target—as long as this is supported by a comprehensive policy package,” said Nick Molho, executive director of the sustainability-focused Aldersgate Group.

Carolyn Fairbairn, director-general of the Confederation of British Industry, said a strong carbon target “can drive UK competitiveness and secure long-term prosperity.” But “some sectors will need clear pathways to enable investment in low-carbon technologies,” she added, “and it is vital that there is cross-government coordination on the policies and regulation needed to deliver a clean future.”“This is a big step forward for the UK, and for our shared global home,” said Baroness Bryony Worthington, executive director of Environmental Defense Fund Europe. “It won’t be easy. But one promising approach to help reach the target is a provision in the Climate Change Act that allows the government to introduce a whole-economy cap-and-trade system and tradeable incentives. The government should commit to a public consultation so these powerful policy tools can be used to get us to our goals cost effectively.”