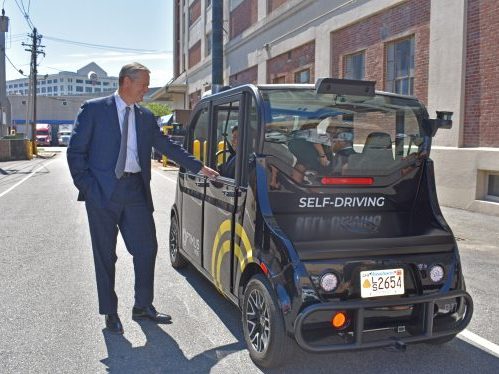 Autonomous vehicles are included in Drawdown’s list of “coming attractions” as an up-and-coming climate solution that hasn’t yet become the norm.

Despite the inevitable obstacles autonomous vehicles face, many estimates put the proportion of self-driving vehicles on the road as high as 75% by 2040. However, Drawdown notes, their exact impact on society—and on society’s greenhouse gas emissions—is not yet clear.

AVs are developing rapidly, and the concept has existed for decades. But Drawdown says they must be considered along with complementary, progressive changes in driving, including shared and on-demand vehicles and connected vehicle technology. With these rising technological developments, a positive shift from private car ownership to cars as a mobility service could deliver significant advantages and savings—from improved health due to reduced pollution, to less roadway congestion.

Connected vehicles involves “vehicle-to-vehicle and vehicle-to-infrastructure communications capabilities, allowing those vehicles to collect and share data with other vehicles, roads, traffic lights, and so on in real time, to smooth traffic flow and increase safety,” Drawdown explains.

Paired with these other developments, Drawdown sees autonomous vehicles as a potential environmental good—not only by reducing congestion, but by favouring electric cars, since more trips would be local in nature and fall within the range of a present-day EV battery.

But the summary points to a variety of cultural and practical considerations that could slow down the rise of autonomous and shared vehicles. Driving and car ownership are embedded in western culture as a symbol of freedom, Drawdown notes, and self-driving cars have an impact on a great many jobs, including delivery drivers, insurance agents, and auto salespeople.

Ultimately, Drawdown predicts that autonomous vehicles will change cities and citizens’ relationship with cars. Their impact on society will depend on whether they continue to reinforce the economic and environmental status quo or foster positive change by encouraging the growth of electric and shared vehicles.