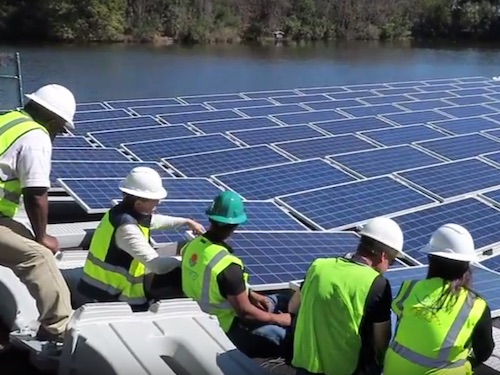 Of the 11 million jobs, IRENA reports, 39% are in China, 3.6 million (including more than three million in Asia) are in solar photovoltaics, and only 32% are held by women.

“Several factors—including national deployment and industrial policies, changes in the geographic footprint of supply chains and in trade patterns, and industry consolidation trends—shape how and where jobs are created,” the report states. “Nonetheless, the increasingly diverse geographic footprint of energy generation capacities and, to a lesser degree, assembly and manufacturing plants, has created jobs in a rising number of countries.”

• While hydropower accounts for the largest share of installed renewables and creates 2.1 million direct jobs, three-quarters of them in operations and maintenance, it has become the slowest-growing segment of the renewable energy sector.

• Solar heating and cooling accounted for about 800,000 jobs world-wide.

• Off-grid solar delivered 372,000 jobs, while “expanding energy access and spurring economic activities in previously isolated communities.” The addition of the off-grid job category to the annual inventory, combined with improvements in data-gathering methods, make it difficult to draw a direct, year-over-year comparison to the 10.3 million jobs IRENA reported in 2017, Forbes notes.

“According to IRENA, factors ranging from national industrial policies to changes in international supply chains and trade patterns as well as industry consolidation are all contributing to the geographic diversification of the jobs market,” the publication adds. “Jobs are being created from a combination of both renewable power plants being built and more manufacturing facilities being developed. In North Africa, for example, a new solar PV module factory in Al-Hoceima, Morocco is creating around 100 jobs for locals –until now, the main employer in the renewables sector in the country had been the Noor Ouarzazate solar power plant. Over in Egypt, construction of the Benban solar complex is expected to require more than 10,000 workers.”With IRENA reporting a decline in renewable energy employment in Europe, PV Magazine says British Prime Minister Theresa May’s recent commitment to carbon neutrality by 2050 could translate into 200,000 solar jobs by 2030, but only with government support.

IEA Could (Finally) Include 1.5°C Scenario in 2019 Annual Outlook Report