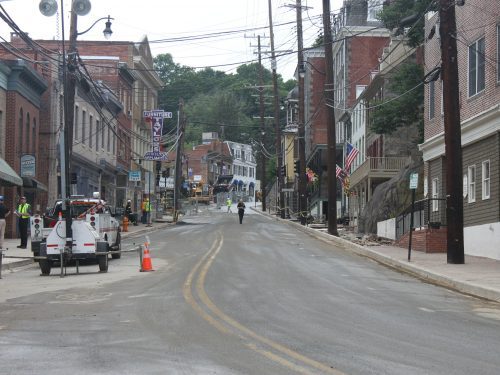 A small Maryland river town which endured a terrifying 1,000-year storm in May 2018, having barely recovered from the one that hit in 2016, is struggling to decide how best to move forward—even as some of its citizens who suffered most remain reluctant to invoke climate change as the underlying cause.

Over the Memorial Day weekend last year, reports CityLab, “back-to-back thunderstorms dumped more than eight inches of rain in just three hours” on Ellicott City (a further seven would fall by evening), producing a flash flood that devastated its picturesque downtown and killed a 39-year-old Maryland Army National Guardsman who was swept away when he waded into the torrent to try to rescue a frightened resident and her cat.

That Ellicott City should have suffered two severe floods virtually back to back is not a surprise, because “the warming world is a wetter one: for every 1.0°F increase in temperatures, the atmosphere holds about 4% more water vapour,” the publication notes.

And the Maryland river town is not alone in its misery, with severe flooding emerging as “the most common natural disaster in the U.S., accounting for nearly three-quarters of presidential disaster declarations over the past decade.”

While the fates of big coastal cities like New York and Miami are grabbing headlines as sea levels rise, inland flooding is an ever-present and growing threat. “From Texas and Louisiana to the upper Midwest, river towns and cities now find themselves reshaped by chronic inundation; the waters that were once their economic lifeblood are now threats to life and limb.”

That climate change is the ultimate driver of such destruction is an idea that doesn’t sit well with some of the residents of Ellicott City, CityLab notes. Jewelry and craft store owner Sally Tennant, who lost everything twice—once in 2016, and again in 2018—is dismissive. Laying blame at the door of city officials who allowed developers free rein, she says, “don’t tell me it’s climate change.”

And it’s true that much of the forest and porous soil that supported the extensive watershed above the original town has been replaced by housing developments whose impervious surfaces serve merely to sluice floodwaters more rapidly down into the valley.

Jim Caldwell, former director of community sustainability for the county in which Ellicott City resides, said state law requires most new developments above the town to be built to withstand a 10-year storm. Since the mid-1990s, stormwater facilities have been equipped to handle the eight inches in 24 hours that a 100-year storm would deliver.

But what was never an option, from either an engineering or a financing point of view, was proofing the town against a storm which should only ever arise once in a thousand years, Caldwell added.

Faced with that reality—and the fear that another 1,000-year storm may be just around the corner—the residents of Ellicott City face “a profound reckoning, one that mirrors the challenge so many human settlements worldwide are confronting: When does retreating rather than rebuilding become the only rational choice?”

For Ellicott City, that reckoning has been a painful one. Many were horrified and angry last August when then-county executive Alan Kittleman released a five-year, $50-million plan that would have meant destroying a fair-sized chunk of the historic downtown to give the inevitable floodwaters somewhere to go.

Since unseating Kittleman in an election in November, Democrat Calvin Ball has spent the last six months coming up with his own flood mitigation plan. Dubbed EC Safe and Sound, the five-year, $140-million effort would involve building a diversion tunnel and retention ponds, and demolishing some buildings, all with state and federal financial support.