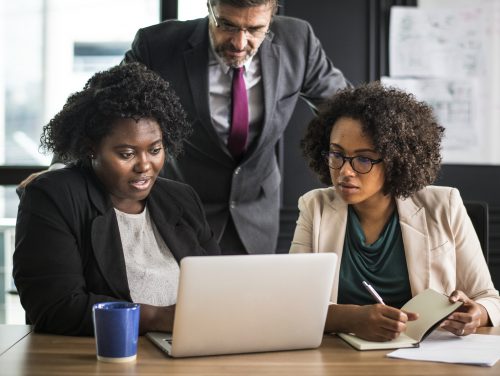 “It’s summer: ditch the suit and tie,” may become a directive heard more often by Canadian office workers, as companies reckon with the cost of heating and cooling their work spaces—and with research suggesting that women function more effectively at work when the AC isn’t cranked to keep their pinstriped colleagues cool.

Just such a seasonal sartorial revolution in the name of fighting global warming has been part of Japanese business culture for the past decade, reports CBC, with newspapers like the Japan Times reminding office workers to “wear light clothes while the air conditioning is set at 28°C.”

The strategy delivers a carbon reduction wherever fossil plants still deliver some part of the electricity, and it always helps keep electricity bills down. Ryerson University interior design professor Catherine Dowling said heating, ventilation and air conditioning (HVAC) systems usually account for half of a building’s operating budget, and are “often badly designed”.

But CBC points to a more basic and important benefit: researchers at Middlesex University recently found that chilly office temperatures leave women, who tend to dress sensibly for the weather, feeling mentally sluggish.

“As anyone who has worked in an open plan office where people cannot control temperatures will know, women seem to complain more about it being too cold,” writes business columnist Don Pittis. “Now science has confirmed the anecdotal evidence,” showing that “not only do they dislike chilly indoor temperatures, cold settings tend to make women less mentally acute.”

While the gender difference is based on statistics that average out individual reactions, “the fact that women generally prefer higher indoor temperatures than men is well supported by survey evidence,” stated the study of 500 university students.

“We find that, for math and verbal tasks, consistent with their subjective temperature preferences, women perform better…at high temperatures than at low temperatures,” the researchers added.

Working against a more sensible office dress code is a business culture that continues to value the “power suit” as a way to stand out from the crowd, Pittis notes.

“People I spoke with in the tailoring business said the ‘casualization’ of the workplace has caused a reaction where men buy and wear tailored suits to stand out. Facebook boss Mark Zuckerberg didn’t show up this week in Ottawa, but when he appeared before Congress he did not wear his trademark T-shirt,” he writes.

“Male politicians, too, often wear the full uniform even in southern states, where air conditioning operates even during our winter. In the television studio, it is a standard complaint. Men are overdressed while women in summer fashion shiver.”

Pittis calls on Canada’s business elite to “lead the way and follow the tech worker trend to T-shirts, shorts, and sneakers.” Dowling’s reaction?

“You know what? That doesn’t seem to be a convention, and I think that’s a really great idea,” she said. “And we would be cooling our buildings much less, which would be better environmentally.”