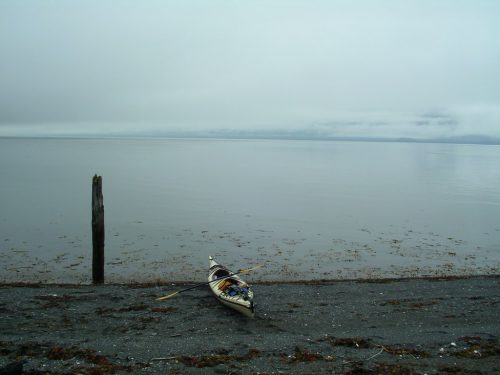 With no climate plan currently in place in the state of Alaska, and federal efforts focused on the state’s rapidly melting northern regions, the Indigenous peoples of the southeast are forging ahead, determined to acquire more data on climate issues most pertinent to them like the rise of lethal phytoplankton which thrive in warmer coastal waters.

Interviewed by Juneau media outlet KTOO while he and his peers from the Central Council of the Tlingit and Haida tested waters off the coast of Juneau for the phytoplankton that cause paralytic shellfish poisoning, natural resource specialist Kenneth Weitzel confirmed a dearth of data on how climate change affects southern parts of the state.

“All the data was focused on Northern Alaska, where the squeaky wheel is getting the oil,” he said. Such a focus is understandable, KTOO notes, as “the wheel has nearly fallen off the axle entirely” in the north, with the Bering Sea virtually ice-free this winter. But that still leaves the Tlingit and Haida with a pressing need for reliable information.

Of particular concern, said Raymond Paddock, environmental coordinator for the tribes, are “slow-moving disasters” like vanishing fish stocks, especially salmon, and the decline of the venerated yellow cedar.

Recognizing that the region’s climate concerns are “more nuanced,” than those of the north, he added, the Tlingit and Haida looked south to Washington State’s Jamestown S’Klallam Tribe for guidance on how to craft their climate change adaptation plan. Approved in April, the 53-page document opens with the acknowledgement that the current lack of data and absence of monitoring must both be redressed.

Paddock views the need for a repository of scientific knowledge as an opportunity, particularly at a time when climate change information is being scrubbed from federal and state websites.

“Data is power,” Paddock said. “And that’s what we’re trying to build our tribes to have, is to have that power in their back pocket when needed.”Also determined to control their city’s destiny in the face of climate change, elected officials in Anchorage recently adopted a set of non-binding proposals aimed at reducing carbon emissions 80% before 2050. While two councillors voted against the plan, local residents who spoke prior to the vote were unanimously in favour of the measure, The Associated Press reports. They cited their own direct experience with more wildfires, warmer winters, more pollen, and more insects, with several asking their council to focus on electric vehicles, bike infrastructure, and renewable energy.