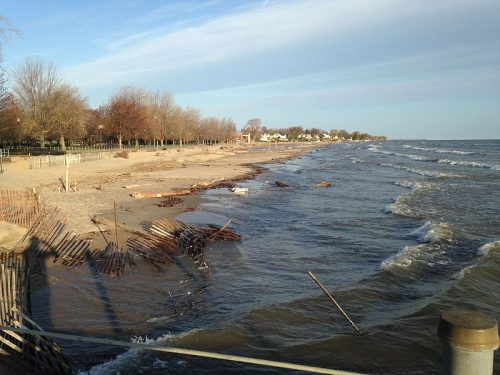 With 2019 precipitation in the region running 150 to 200% or more above normal, water levels in the Great Lakes have risen by as much as 0.3 metres (one foot) from the same time last year, inundating shoreline communities and leaving experts certain of yet another marker of a destabilizing climate.

“During the month of May, the water level of Lake Superior rose five inches, and the water level of Lakes Michigan-Huron rose nine inches,” leaving both lakes washing up as much as a foot higher than last year, the Washington Post reports, citing the U.S. Army Corps of Engineers. Last month, Lake Erie rose to its highest-ever recorded level.

In all cases, the Post says the rising water levels, which have destroyed roads and infrastructure, have been driven by heavy winter snows and extreme amounts of spring precipitation.

Though immediate forecasts project water levels continuing to rise through June, and on into the summer in the case of Lake Superior, University of Michigan hydrologist Drew Gronewold said the pattern of the past two decades suggests wild swings between too much Great Lakes water and too little.

“To see this in action,” the Post states, “we need look no further than the flooding of today, compared with the record lows six years ago.”

University of Michigan climate scientist Richard Rood said the extremes are “undoubtedly” the consequence of a warming climate. “We are at the beginning of what’s going to be a number of decades where the climate is going to be changing very fast,” he said. “During that time, we will have many unexpected weather events, and we need to learn from these events to better prepare for the future.”