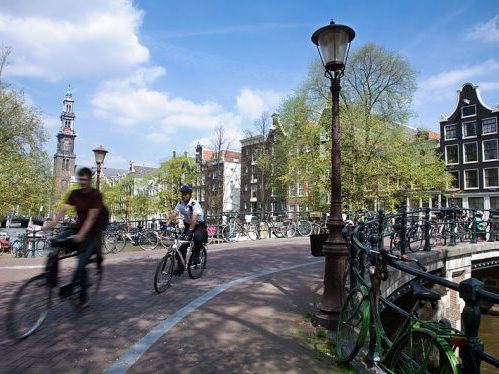 Two months after Amsterdam officials announced plans to cut some 10,000 parking spaces in the city core by 2025, pavements are rapidly blossoming with garden plots, children at play, and citizens delighted to have more space to move and mingle.

The Netherlands capital is deploying “a few different strategies to systemically whittle down its parking stock,” reports City Lab, including permanently retiring parking permits which would, under the old rules, have re-entered circulation when owners decided to go car-free, moved away, or died.

Taking advantage of the large number of streets in need of repair, city planners are also using road work as the first step to securing a permanently car-free space.

What city officials are not doing is stripping anyone outright of their right to park, though drivers determined to continue parking in the city core will face greater restrictions and higher costs.

Amsterdam’s success at returning more of its pavements to the people owes to its having a significant mandate to do so, CityLab notes: the coalition agreement between the left and centrist parties leading city council included an explicit promise to reduce parking spaces, which at the time consumed as much as 40% of available street space.

“The disappearance of so many spots might feel like an assault on drivers,” writes CityLab, and that would likely be the narrative unfolding “in the average North American city.” Such is not the case in Amsterdam, however, with even local newspapers hardly covering the story at all. That could reflect the fact that “so few Amsterdammers drive in the first place,” with 65% of daily trips being made on bicycles.

Amsterdam is not the only world city determined to return more of its streets to its people. A March report by Fast Company, cites Oslo, Buenos Aires, London, Madrid, Paris, Cairo, Seoul, Beijing, and Chennai as jurisdictions turning sour on cars—in large part because of air pollution. Oslo removed 700 parking spaces from its core in 2018, Paris is redesigning intersections to privilege people over cars while expanding bike lanes, and a pedestrian pathway built from a highway overpass in Seoul drew 10 million users in its first year, along with a 42% increase in area business sales.

Hanne Marcussen, Oslo’s vice mayor of urban development, commented “that when people imagine their ideal city, it would not be a dream of polluted air, cars jammed in endless traffic, or streets filled up with parked cars,” Fast Company reports.