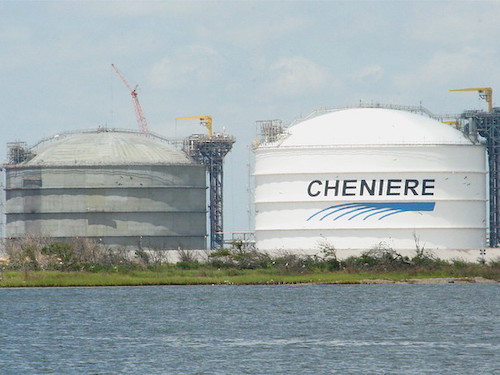 A series of leaks and cracks in the massive liquefied natural gas storage tanks operated by Cheniere Energy, the Houston company that until recently had a virtual monopoly on U.S. LNG exports, is raising alarming questions about a company that has seen a decade of rapid growth and enjoyed steady support from Trump Republicans and Obama Democrats alike.

A news summary late last month by E&E News, the U.S. Center for Public Integrity (CPI), and the Houston Chronicle evokes the risk of out-of-control LNG fires that echoes some of the earliest concerns that surrounded the technology when it was introduced in the late 1970s.

The concerns centre on Cheniere’s massive, 1,000-acre Sabine Pass terminal in Louisiana, where the cracks in the company’s success story began to show up—literally and figuratively—in 2018.

“Gashes up to six feet long opened up in a massive steel storage tank at Sabine Pass, releasing super-chilled LNG that quickly vapourized into a cloud of flammable gas,” the CPI reports. “Federal regulators worried the tank might give way, spilling the remainder of the fuel and setting off an uncontrollable fire. It wasn’t an isolated event: Another tank was leaking gas in 14 different places. Both tanks remain out of service over a year later.”

An investigation by the U.S. Pipeline and Hazardous Materials Safety Administration (PHMSA) soon revealed problems at four of the five Sabine Pass tanks, dating back a decade. And Cheniere appears not to have been terribly helpful with the regulatory probe: the normally industry-friendly PHMSA noted the company’s “reticence to share [its] sense of what might have gone wrong.”

The story raises concerns about workplace and public safety, since a full-scale fire at an LNG fire would be impossible to control. The leaks are also “a red flag at a time of unprecedented expansion in the LNG industry, which promotes the fuel as not only safe but also a clean, more climate-friendly alternative to coal,” the Center notes. “The problem is that natural gas is made up mostly of methane, a greenhouse gas far more potent than carbon dioxide at warming the Earth’s atmosphere. Leaks erode the fuel’s climate advantage over coal.”

The story details Cheniere’s pathway from a marginal business venture in 2009 to an LNG exporter in 2016, taking advantage of the U.S. shale drilling boom to repurpose Sabine Pass from its original design as a relatively modest import terminal. The problem is that, with more than a dozen U.S. export projects now under development, federal regulations “haven’t kept pace,” CPI explains. “They were written for simpler import and gas storage facilities, not complex, multi-billion-dollar export facilities. In April, the White House directed regulators to update LNG safety rules. But it’s unclear what that will look like—or whether any new design requirements would apply to projects already in the works.”

The safety story at Sabine Pass began in January 2018, when a worker spotted a pool of LNG vapourizing beside a storage tank. “The biggest immediate risk was that the cloud of low-lying natural gas building around the tank could have drifted until it hit an ignition source—static electricity, for instance—and burst into flames,” CPI writes. “Two days later, Julie Halliday, a senior accident investigator with PHMSA, inspected the tank and found the outer wall had cracked in four places and was still leaking gas.”

Investigators eventually discovered more than a dozen leaks around the base of a second tank, and on February 8, PHMSA ordered Cheniere to shut both tanks down. “During a public hearing in Houston in March, Halliday said there would be no way to put out an entire tankful of LNG if it caught fire.”

“Sabine has been unable to correct the long-standing safety concerns…and cannot identify the circumstances that allowed the LNG to escape containment in the first place,” PHMSA wrote in what the CPI calls an “uncharacteristically forceful” control order. “Continued operation of the affected tanks without corrective measures is or would be hazardous to life, property, and the environment.”

Cheniere’s “damage control” response was to fight the order and play down the risk to its 500 onsite employees. “We want to stress that there was and is no immediate danger to our community, work force, or our facility from this incident, nor is there any impact on LNG production,” said spokesperson Eben Burnham-Snyder.

But despite Cheniere’s limited cooperation with investigators, CPI says, “information has trickled out, suggesting deeper problems at the site. During the investigation, the company acknowledged that four of its five tanks had experienced a total of 28 temperature anomalies since 2009, increasing in frequency after the shift to exports in early 2016. Cold spots on LNG tanks can suggest leaks or insulation problems, and when the outer wall of a tank like those at Sabine Pass gets too cold, it can become brittle and crack.”

Cheniere held that information back from federal regulators for two years, but Burnham-Snyder maintained the company is “committed to compliance and timely reporting.”

PHMSA is still investigating the leaks and “has not fined Cheniere for the 2018 incident or its reporting failures,” CPI reports. “The agency has not provided the public with basic records about the leaks, citing an ongoing review of the company’s confidentiality concerns. Cheniere, in fact, threatened to sue PHMSA if it released additional information in response to public records requests,” citing commercial confidentiality in a tough, competitive industry.

“There’s no reason a specific tank design or a drawing or a photo of the incident cannot be shared publicly,” countered consulting engineer Ernie Megginson, who worked on another LNG installation. “For an issue of this magnitude, Cheniere, as a leader in this industry, should lead the way in safety and transparent reporting.”

The feature report goes into depth on two technical issues—the cost and regulatory trade-offs between LNG tank designs that offer higher or lower levels of protection and safety, and the higher risk of explosions at export versus import facilities. LNG safety expert Jerry Havens warned that project assessments might be seriously underestimating that risk: The worst case, he said, is “cascading explosions that could destroy a plant and possibly extend damages to the public beyond the facility boundary.”

The other aspect of the story is the preponderance of former Obama administration officials in senior roles at Cheniere, including ex-Department of Energy staffers Burnham-Snyder, Christopher Smith (now serving as Chenier senior VP), Robert Fee (now chief of staff), and Steven Davidson (now community affairs manager). Heather Zichal, an architect of Obama’s Clean Power Plan now working at The Nature Conservancy, has received considerable attention for her seat on the Cheniere board from 2014 to 2018, an assignment that earned her more than $1 million in fees and company stock.

Cheniere’s website includes a hat-tip to “the scientific consensus on climate change,” cites the 2015 Paris Agreement as a “good start,” and touts the company’s efforts to capture its carbon emissions, CPI notes. In contrast to research teams and environmental groups that increasingly recognize methane emissions as an urgent climate risk, and gas as no bridge to a renewable energy future, “Cheniere sees natural gas as a fundamental energy source in the energy transition to a lower-carbon future, along with renewable sources of energy.”