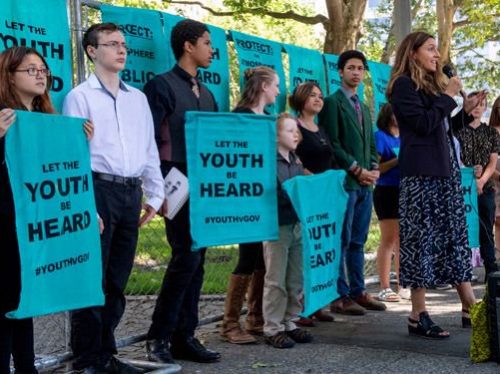 Major youth climate lawsuits in the United States and Canada both advanced this week, with the 21 plaintiffs suing the United States government for its inaction on the climate crisis finally getting to petition for their day in court, and Montreal-based ENvironnement JEUnesse arguing for its class action suit against the Trudeau government.

In Portland, Oregon Tuesday, a panel of three judges from the Ninth Circuit Court of Appeals delved into the long-running case of Juliana v. the United States, with judges pushing back on legal arguments from both parties. In Montreal Thursday, ENJEU lawyers made the case for a class action representing all Quebecers aged 35 and under, “whom lawyers argue are being deprived of a right to a healthy environment and will suffer the effects of global warming more than older generations,” CBC reports (see accompanying story).

Juliana turns on whether young people in the U.S. have a constitutional right to be protected from the impacts of climate change, the New York Times reports. The Trump administration’s interpretation of that right has been reflected in its repeat attempts to have the case thrown out before it could even be heard, arguing that “there is no fundamental constitutional right to a ‘stable climate system’.” Elsewhere, The Guardian says, the government has oddly argued that Americans don’t have a right to “a climate capable of sustaining human life”.

On Tuesday, the Juliana plaintiffs and their attorneys from Eugene, Oregon-based Our Children’s Trust petitioned for a court to hear their full case to the contrary. If the three-judge panel accepts the government position, they argue in a legal brief, the youth risk being deprived of their “rights to life, liberty, property, and public trust resources by federal government acts that knowingly destroy, endanger, and impair the unalienable climate system that nature endows.”

The brief adds that “these young people deserve that chance to present their full case against those who through their governance harm them, and let the light of justice fall where it may.”

Juliana also calls on the government to halt new fossil extraction projects while the case is pending. The Guardian says that inventory includes 60 new oil and gas pipelines, 32 new liquefied natural gas and coal terminals, and one oil export facility.

Trump administration lawyers cast the youth plaintiffs’ case as “misguided” and fatally flawed. They say the plaintiffs’ proposed solution is unworkable and unconstitutional, the Times writes, “essentially placing a single district court in Oregon—acting at the behest of a few plaintiffs with one particular perspective on the complex issues involved—in charge of directing American energy and environmental policy.”

“It is a case that is a dagger at the separation of powers,” argued Assistant U.S. Attorney General Jeffrey Bossert Clark. “This is a suit that is designed to circumvent a whole bunch of statutes.”

“When our great-grandchildren look back on the 21st century, they will see that government-sanctioned climate destruction was the constitutional issue of this century,” countered Our Children’s Trust chief legal counsel Julia Olson. “We must be a nation that applies the rule of law to harmful government conduct that threatens the lives of our children, so that they can grow up free and pursue their happiness. That is what the founders intended.”

The three judges in the case, all appointed by President Barack Obama, “pressed the lawyers for both sides, seeming to suggest that the government’s arguments in favour of shutting down the case were too narrow and finding the plaintiffs’ legal theories too sweeping,” the Times reports.

Judge Andrew D. Hurwitz “leaned on the government’s claim that even if the executive branch of the government is doing harm through inaction on climate change, a lawsuit can’t correct the problem.” He led Clark through a “far-fetched hypothetical involving Canadian terrorists crossing the border and kidnapping and killing children. Under the government’s theory, he asked ‘the plaintiffs would have no option but to die?’”

But he also pressed Olson on her central claim that the rights the youth are claiming aren’t difficult to find in the U.S. constitution. “Look, you’re arguing for us to break new ground,” he said. “You may be right. I’m sympathetic to the problems you point out. But you shouldn’t say this is just an ordinary suit….You’re asking us to do a lot of new stuff, aren’t you?”

“We’re asking the court to apply bedrock constitutional law and principles to a wholly new set of facts,” Olson replied.

Juliana was originally filed against the Obama administration in 2015, and it’s taken this long to get to court. “The case, and the children, are aging,” the Times notes. “Five of them are now old enough to buy beer and 14 of them can vote.”

“We’ve been doing this four years,” said plaintiff Vic Barrett. “For some of us, that’s a quarter of our lives.”

And over those years, “the sense of urgency about the need to address climate change has only grown, with reports like the one last year from the United Nations climate panel that projected dire consequences without vigorous action, including worsening food shortages and wildfires, and a mass die-off of coral reefs as soon as 2040,” the Times adds. “In those same years, a youth climate movement has risen up and adopted Juliana as part of their broader call for action on climate change.”

During the hearing, Our Children’s Trust senior staff attorney Andrea Rodgers noted the U.S. administration regularly touts its commitment to fossil fuels, most recently and ludicrously referring to climate-busting methane as “freedom gas” and “molecules of U.S. freedom”. She added that, “as the delays continue, the government-created public health disaster gets worse.”

University or Oregon law professor Mary Wood, who supplied some of the legal reasoning behind the case, told the Times the Trump administration is “aggressively accelerating toward the climate cliff through its frenzied fossil fuel policy, at a time when nations around the world are slamming on the brakes.”

At this stage in the process, with the Juliana plaintiffs still arguing for the right to present their full case, the Times says the judges can either accept or dismiss the claim, and there’s no sense yet of when they’ll decide.

“If the Ninth Circuit expresses a view about the proper role of the courts in addressing climate change, that could have broad implications for other cases,” said Prof. Michael Gerrard, founder of Columbia Law School’s Sabin Center for Climate Change Law. “But it is also possible that the court will rule on narrow procedural grounds that apply only to this case.”

“In my heart, I love this lawsuit. Everything that’s compelling about this lawsuit from the beginning is even more compelling today,” said former federal prosecutor David M. Uhlmann, now head of the environmental law program at the University of Michigan. “I think anybody who has studied this court would have to conclude this is an uphill battle,” but “it’s not a foregone conclusion that the Supreme Court would reject these claims.”

The high stakes attached to the case, and the years it’s taken to get this far, “have catapulted it to rare courtroom celebrity,” The Guardian reports. “The youth plaintiffs are media regulars, with seemingly ubiquitous appeal: teen magazines, local newspapers, radio shows, and recent appearances on 60 Minutes and in Vanity Fair. Hearings have been a spectacle, regularly mobbed by suit-and-tie types, kids of all ages, tie-dye and purple-haired grannies. More than 70 support rallies were held worldwide in lieu of a trial last fall,” after the Trump administration managed to postpone the process. Again.

“The digital following is no less a curiosity,” The Guardian continues. “The youth climate movement has begun to claim Juliana as central to its own narrative, using support rallies to train young leaders and to turn up the digital volume on the case with hashtags like #AllEyesOnJuliana.”

On Tuesday, the proceedings were “livestreamed and broadcast into a park near the courthouse,” the UK-based newspaper notes. “Following the hearing, the plaintiffs walked from the courthouse to the park, where a marching band played and activists shouted chants. Levi Draheim, one of the plaintiffs, rode on the shoulders of Nathan Baring, another plaintiff.”

Meanwhile, more than 30,000 youth and 10,000 adults have signed an amicus brief filed by Zero Hour, calling for the case to move to trial. “I don’t want to be picking these fights. The youth don’t want to be picking these fights. And, honestly, it’s exhausting to be in the streets all the time,” said executive director Jamie Margolin, 17. But they don’t have any other choice when every other effort has failed.

“Our childhoods are being spent begging them to stop ruining our adulthoods,” Margolin said, “and our adulthoods are going to be spent dealing with the consequences of their actions.”Last fall, Olson told the Washington Post she was optimistic the case would eventually get a full hearing. “We’ve been confident throughout this case that we would get to trial, and I believe we will get to trial,” she said at the time. “We have overcome everything the government has thrown at us. It is not luck. It is the strength of the case and the strength of the evidence and the strength of the legal arguments we are making.”

Are we elders ( I’m 71) going to renege on our responsibilities to our offspring. What kind of “guardianship” is that? Bail out because it’s too difficult? Die with our consciences plagued by our ineptitude.
Not me! Letting Trump and his ilk negate science and hard evidence is not what I call adult behaviour. These young people have wisdom that used to be the birthright of he aged. When I was growing up we were taught to respect the elderly, we have forfeited that right through our greed and avarice.

Youth may yet save us all. H