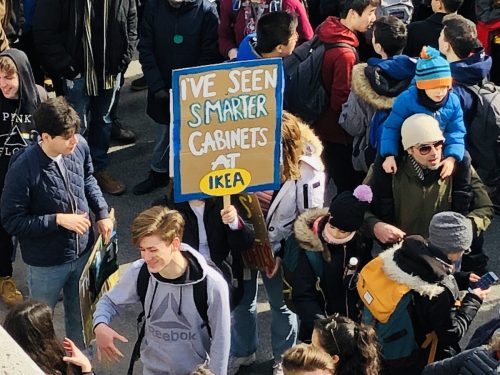 Lawyers representing Montreal-based ENvironnement JEUnesse went to court yesterday to make the case for the organization’s class action suit against the Trudeau government’s inadequate response to the climate crisis.

“Lawyers for a well-known Montreal law firm that specializes in class actions argued on behalf of the group…that the Canadian government is violating the fundamental rights of an entire generation,” CBC reports. “The class action would be on behalf of all Quebecers aged 35 or younger, whom lawyers argue are being deprived of a right to a healthy environment and will suffer the effects of global warming more than older generations.”

ENJEU wants to see Ottawa assessed $100 for each Quebecer in the target age group for the suit—and the group has an innovative idea for distributing the funds.

“Because doling out an award estimated at C$340 million would be complicated and expensive, the action suggests the money be spent on measures to curb climate change,” CBC states. “The goal of the suit is also to obtain a statement that the government has adopted greenhouse gas reduction targets that are dangerous, because they do not go far enough, and that it has failed to take necessary steps to limit global warming to within 1.5°C.”

Federal lawyers argued the case wasn’t a matter for courts to decide, and that lawsuits shouldn’t be allowed to override the government’s executive powers.

At court Thursday, college student and ENJEU member Zy St-Pierre-Bourdelais took issue with the way Ottawa is using those powers.

“Climate change is going to be a big part of our collective future. We’re living a lot of doubts, and we don’t know how it’s going to be, so it’s really stressful,” he told CBC. “I’m here for the future generations, and for my children.”