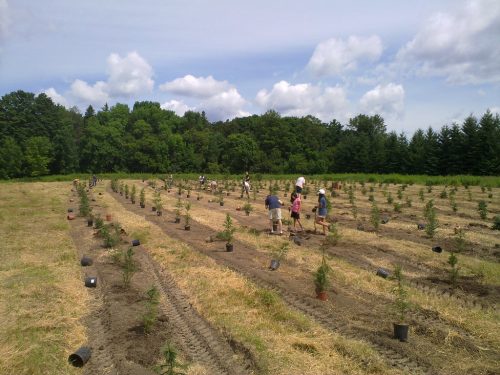 The federal government has tossed an emergency lifeline to Ontario’s 50 Million Tree Program, committing C$15 million over four years after the Ford government suddenly cut the non-profit initiative in its 2019 budget.

“While Mr. Ford cuts programs that support tree planting…and tackling climate change, we will continue to invest in a clean future for our environment, our economy, and our kids,” Environment and Climate Minister Catherine McKenna told CBC News in a prepared statement Tuesday evening.

The federal cash will support the planting and growth of 10 million trees, CBC says.

“The 50 Million Tree Program had an annual budget of $4.7 million and had planted more than 27 million trees across the province since 2008. Its goal was to have 50 million planted by 2025,” the national broadcaster states. “But a day after Ontario’s budget was delivered, Forests Ontario, the non-profit group that oversees the program, was told funding for it was being eliminated.”

The news hit just as the province’s four key tree nurseries were getting their plans in place for the 2019 growing season. The funding withdrawal had long-term implications, Forests Ontario CEO Rob Keen explained, since it takes three to four years for a tree to grow from seed to sapling.

He added that tree cover in Ontario currently averages 26% and ranges as low as 5%, when a 40% threshold is needed to maintain a sustainable forest.

“A successful program of this scale requires years of complex planning and financial commitments,” he said in a release. “This federal funding ensures that the 50 MTP is uninterrupted—we need to plant seeds now in order have seedlings” in 2023.

“Every year, the four key nurseries in Ontario participating in the program cultivate 2.5 million seeds between them, which they nurse over three years until they are ready to be planted in their permanent settings,” CBC says. “The funding cut left 7.5 million saplings at various stages of growth in limbo, with nursery owners unsure how they were going to fund their crops until they were ready to plant.”

In the period between the provincial cut and the federal rescue, there was concern that those trees would ultimately be destroyed.

Ed Patchell, CEO of the Ferguson Tree Nursery in Kemptville, said his facility has three million trees at various stages of growth. “He said he was unsure what to do with them but is pleased they will now be guaranteed a permanent home when they are ready to plant,” CBC reports.

“I think it’s great that the feds have stepped up,” he said. “I would like to see the province step up, to see a value in the program and contribute as well, but we’ll see what happens.”

Ontario Natural Resources and Forestry Minister John Yakabuski maintained the program cut was part of his government’s effort to balance the budget and “protect critical public services like health care and education,” portfolios where Ontario communities have also been pushing back against brutal cutbacks.

“In order to do this we have to maximize value for the taxpayer dollar,” he said in a statement  to CBC. “We remind other levels of government that there is only one taxpayer, and that we have committed to balancing Ontario’s budget in a responsible manner.” The Forests Ontario cut sparked a petition that gathered more than 92,000 signatures, the organization said, showing “that people value and recognize the importance of trees and the benefits they provide—carbon sequestration, protection against flooding and drought, wildlife habitat, and the many other vital services that trees and forests provide.”