Mass Puffin Die-Off in 2016 Shows the ‘Ocean is Screaming’ 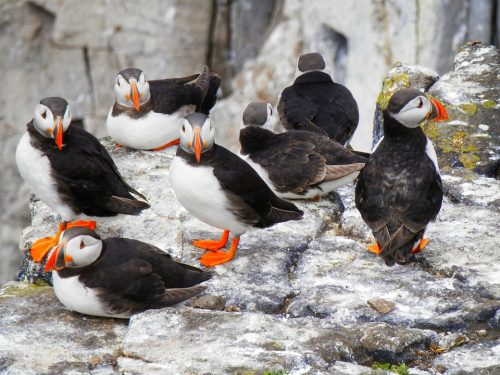 Climate change is being blamed for the starvation deaths of up to 9,000 Alaskan puffins and other seabirds in 2016, and millions in less than a decade, after rising sea temperatures prompted the fish they eat to migrate north.

“There’s no way to avoid that something is going on here,” said University of Washington ocean fishery scientist Julia Parrish, executive director of the Coastal Observation and Seabird Survey Team (COASST). “The ocean is screaming.”

Parrish, co-author of a new study in the journal Plos One, said this was the sixth-die-off her team had documented since 2014, including 400,000 Cassin’s auklets in a single year and more than 500,000 Common murres a year later. “We’ve had die-offs before, but now we’re seeing them every year,” she told InsideClimate News. “Altogether that’s millions of birds dying. Millions.”

“The bodies of dead, emaciated puffins began washing up on beaches on Saint Paul Island in autumn 2016,” the BBC reports. “The findings add to fears that rising temperatures are having unpredictable effects on birds, bats, and other wildlife,” with one recent study concluding that shifts linked to climate change put birds in the Arctic at higher risk of having their nests raided by predators.

“The latest study looked at tufted puffins breeding in the Bering Sea, off the coast of Alaska,” the BBC explains. “The birds feed on fish and marine invertebrates, which in turn feed on ocean plankton. Scientists fear that unusually warm waters can shift the ocean food web, spelling trouble for marine life, including puffins.”

InsideClimate notes that the Arctic has warmed at twice the rate of the rest of the world in recent years, and “warmer waters have come up through the Bering Strait, wreaking havoc on the ecosystems there. This winter, during a time when the sea ice should have been expanding in the region, an area the size of Montana melted instead.”

“We’re seeing an increase in the transport of ocean heat through the Bering Strait,” said Mark Serreze, executive director of the U.S. National Snow and Ice Data Center. “We’re trending toward this no longer being the unusual situation, but closer to a new norm.”

The warmer water moving north has caused changes that begin at the bottom of the food chain. “There’s a shift to smaller and less energy-intense species,” Parrish said. “It’s like going from a Cliff bar to a rice cake. You can eat the same volume, but you’re not going to get the same nutrients. If you’re a predator, you have to work harder and spend more energy to get energy.”

Of the 450 people on Saint Paul Island, 90% are members of an Aleut tribe to whom the puffins still hold great cultural significance. “This island is 450 close-knit people and their culture is at risk,” said study co-author Lauren Divine, director of the Aleut Community of St. Paul Island Ecosystem Conservation Office.

“Fortunately, Alaska natives are very resilient. They’ve been there tens of thousands of years and will be into the future,” she added. But “they’re losing very important pieces of their culture due to things completely out of their control.”