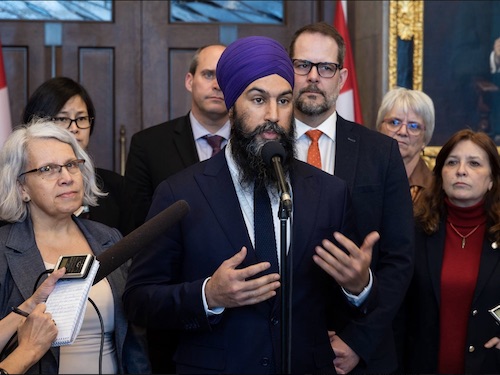 At the CUPE Ontario convention in Toronto Thursday, Singh gave early hints at a C$15-billion “Canadian New Deal”, an ambitious economic stimulus package that would include a “bold” commitment to upgrade the energy performance of every Canadian home by 2050, supports for solar panels, energy-efficient windows, and energy-saving appliances, a publicly-owned climate investment bank, and an end to fossil subsidies, CBC reports. The plan would also include a $6.5-billion investment in clean transportation, including a $15,000 rebate for Canadian-made zero-emission vehicles, a commitment to “fare-free” transit, full electrification of the country’s transit fleets by 2030, and high-frequency rail along the Quebec City-Windsor corridor, iPolitics adds.

“I want a future where…you will go to school or go to work on free and accessible public transit or in your own zero-emission car, all built in Canada to build our economy,” he said, adding that the plan would re-employ workers from emission-intensive industries. “We cannot leave workers and communities behind,” he told the convention.

In Quebec City Friday to address the Federation of Canadian Municipalities, Trudeau pledged his government would continue to work with cities to address extreme weather, housing shortages, and climate change, even if provincial governments aren’t interested in playing along. “We are an election away from going back to the days when austerity was the federal government’s only policy,” he said. “We’ve seen conservative politicians do this before, so we can’t act surprised when we see them do it again.”

Trudeau singled out Ontario Premier Doug Ford for “playing politics with money that belongs to your communities, and your citizens are paying the price,” after Ford cancelled retroactive cuts in municipal funding amid a storm of objections.

A day earlier, Environment and Climate Change Minister Catherine McKenna said small businesses in Manitoba, New Brunswick, Ontario, and Saskatchewan—the four provinces subject to the federal backstop price on carbon—will be eligible for up to $1.4 billion in federal support over the next four years to cut their energy use and greenhouse gas emissions.

“It took a while, to be honest, to get the details right,” she said. But “we wanted very practical things that will help small businesses save money.” The Financial Post says the efficiency measures would be funded by carbon tax revenue.

On Saturday, Abacus Data reported Trudeau’s Liberals and Andrew Scheer’s Conservative Party essentially tied, with 33% and 32% of the decided vote, respectively. The Green Party stood at 12%, closing in on the New Democrats at 16% and leading them in British Columbia, Manitoba and Saskatchewan, and the Atlantic provinces.

Abacus reported that 44% of Canadians were prepared to consider voting Green, an increase of four points since April and eight since December. The research also showed that 19% saw Green leader Elizabeth May as the best option for prime minister, compared to 12% for Singh, and May had the best favourability rating among the party leaders—+16, against -4 for Singh, -6 for Scheer, and -14 for Trudeau.