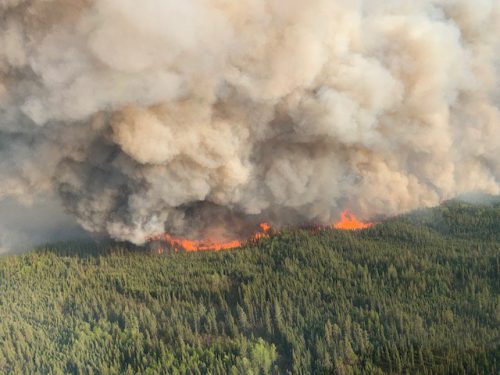 As of June 2 at 10:00 AM local time, Alberta Wildfire reported 10 new wildfires in the previous 24 hours, four of them under control and another six extinguished. But the provincial agency also listed 24 other blazes across the province—seven out of control, 10 under control, three “being held” and not expected to spread, and four turned over to other authorities. All told, fires had burned more than 577,000 hectares (1.425 million acres), including 305,000 ha. at the massive Chuckegg Creek fire near High Level and 217,000 in the Slave Lake management area.

“This fight is going to be a tough one,” said Alberta Agriculture and Forestry Minister Devin Dreeshen. “The weather is not cooperating for the long distance forecast for the next two weeks. It’s more of the same, of hot, dry, and windy conditions.” So “Albertans need to prepare themselves for this situation for the foreseeable future.”

CBC reported 10,000 evacuees in Alberta as of Friday, including 5,000 from High River who’d been sheltering for more than a week while firefighters battled to save their homes. Northern B.C. was reporting 42 active fires, while a 3,000-hectare blaze north of Thunder Bay had triggered a state of emergency and evacuation at the Pikangikum First Nation. Wildfire Today posted satellite photos of the three active wildfires in Alberta, and of the pyrocumulus cloud over the Chuckegg Creek blaze, homes were destroyed at Alberta’s Paddle Prairie Métis Settlement, and CN Rail confirmed that the Steen River railway bridge to Hay River, Northwest Territories had burned down. CBC reported wildfire smoke in Edmonton and from Calgary to Red Deer turning the air into a “hazy hell” for asthma sufferers, though at least one local report had the wind changing in Calgary and the air clearing within about three hours.

Wildfire Today published maps of the smoke carrying into the midwestern United States, then on to the east a day later. On Sunday, the western U.S.-based specialty publication said cooler weather and a slight chance of intermittent showers in Alberta were expected to slow the fires and deliver some relief from polluted air across the northwest, especially Montana and Idaho.

In northern Ontario, more than 800 people, some of them on Canadian Forces aircraft, evacuated the fly-in community of Pikangikum with a 3,600-hectare wildfire just kilometres away, CBC reported Saturday. “Others have been able to use the community’s emergency exit route, which involves taking a half-hour boat ride through Taxi Bay, which offers access to Nungesser Road and Red Lake,” the national broadcaster added.

“If anyone can just try to put themselves in their shoes for a second, you think about the level of anxiety and fear,” he told CBC. “You’re thinking, ‘’am I going to lose my life, or am I going to lose my home? Will my home still be here when I get back? When do we get out of here?”

But forget mass evacuations, plummeting air quality, and devastated boreal forest. The biggest tragedy of the week fell on Jason Kenney, forced to cancel a celebration to mark the repeal of his province’s carbon tax after staff decided against the optics of the orange haze in the background of any TV shot. “This event has been cancelled so the premier can receive an internal, real-time briefing on the status of Alberta’s wildfires,” the provincial government said in a prepared statement.

“Legislation to cancel the carbon tax was the first law Kenney’s government introduced in the Alberta legislature after the election,” National Observer reports. “A price on carbon is designed to dissuade the burning of fossil fuels that contribute to the global climate emergency, which is expected to increase the frequency and severity of wildfires in the coming years and decades.”

“We’re hoping and praying for the best tonight,” the premier said of the High River blaze. “I would also say the carbon tax didn’t stop forest fires in British Columbia or in Alberta,” he told media Friday. “We’ve always had forest fires and we always will. It’s true that there’s dry conditions up north right now. There’s complex factors at work.”

Fire management specialists who actually understand those complex factors said the human toll and physical destruction “will intensify in the coming years as the climate changes,” CBC noted.

“We can’t always rely on our experience and the history of what we’ve seen in fire; we’re moving into new territory,” said University of Alberta wildland fire specialist Mike Flannigan, who was involved in assessing the fire known as The Beast when it consumed much of Fort McMurray in 2016. Flannigan’s co-authored scientific paper in 2017 predicted the most dangerous forest fires will become twice as likely to break out into unstoppable infernos in the decades to come.

The 2.5 million hectares currently consumed during Canada’s annual fire season add up to “half the size of Nova Scotia,” he told CBC last week, “and it’s doubled since the early 70s due to our changing climate.”

In the Globe and Mail, Glenn McGillivray, managing director of the Institute for Catastrophic Loss Reduction, says early May wildfires aren’t unusual in Alberta, adding that “climate is a complicated stew made up of all kinds of different ingredients,” of which human activity is one. But attribution science “has gotten to the point where we can now look at a particular hazard event and determine what specific role climate change played in the way that event unfolded,” he explains.

“We can now bring data to bear against a sophomoric argument favoured by climate change deniers—that if we could have natural disasters in the past when current climate change wasn’t yet on the radar, then similar events today can’t be associated with a warming climate. That seriously (and perhaps intentionally) misses the point of climate change.”

McGillivray describes climate change as “a force multiplier: It doesn’t directly produce severe weather, but it does nurture and amplify it. It takes something that likely would have happened anyway and makes it worse. It also loads the dice, making severe loss events more likely to happen.”

When it comes to wildfires, “climate change can mean a fire season that begins earlier than before,” he added. “It can mean bigger, hotter, faster-moving fires. It can mean more lightning, which is the cause of roughly half of all wildfires in Canada. It can also mean a season that can extend later.”