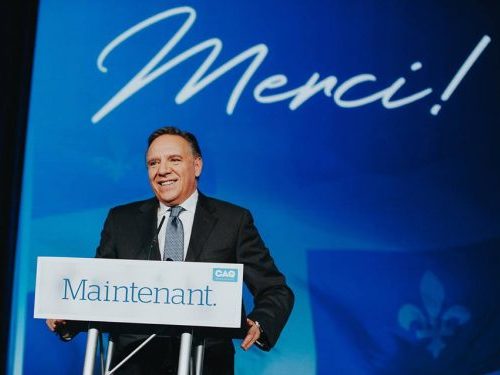 Quebec will invest massively to cut its oil consumption 40% by 2030 and shift transportation, buildings, and businesses to electricity, Premier François Legault announced Sunday, during his party’s general council meeting in Montreal.

He said his government would fund its “electrify Québec” vision by reviewing the management of the provincial Green Fund and increasing infrastructure funding, National Observer reports.

“I want that in four years, it will be said that no government has realized as many public transit projects as the Coalition Avenir Québec government,” he told an audience of 1,300 supporters.

“What I want is a richer Quebec and a greener Quebec,” added Legault, whose government has been under fire from the National Assembly opposition and youth in the streets for its lack of a coherent climate plan. “More than 80% of the oil we have in Quebec is either from Alberta or from the United States,” he told reporters afterwards, so “of course I want to reduce the consumption of oil. For sure. And I have no problem saying that to Jason Kenney.”

The Quebec premier “said from now on his government will only finance public transit projects that are electric and that are built mostly in Quebec, and will take steps to ensure that all new public buildings be powered by clean energy as of 2020,” Observer states. He’s specifically “tasked his transport minister with seven different projects, including the expansion of an existing subway line and a light-rail system being built in Montreal, as well as tramway projects for Quebec City and Montreal’s South Shore.”

Legault cited U.S. rules requiring 65 to 70% local content in infrastructure procurements, adding that “we have to see what the laws allow” for similar provisions in Quebec.

The province is also looking at more generous electric vehicle purchase incentives for people outside major urban centres who have no access to transit. And programs are in the works “to encourage owners of residential and commercial properties, as well as those in the industrial and agriculture sectors, to switch from heating oil to hydroelectricity,” and for “more innovation and new technologies to aid in the transition,” Observer writes.

Legault said he was confident in his ability to position Quebec as the “green battery of North America” by selling surplus hydroelectricity to neighbouring jurisdictions. For Ontario, where civil society analysts have long advocated hydro imports as a more affordable alternative to costly nuclear refurbishments, the premier envisioned “a deal they can’t refuse: cheaper energy and clean energy.”

Observer says Ontario Premier Doug Ford has so far turned that deal down.