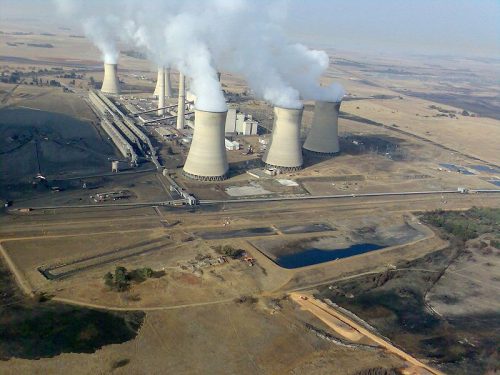 South African industry will be subject to a carbon tax from June 1, after President Cyril Ramaphosa signed the policy into law on Sunday.
Ramaphosa’s African National Congress party was returned to office with a reduced majority in an election earlier this month. While climate change was barely mentioned in the campaign, the result allows the government to finally implement a tax that has been under discussion since 2010.

“Climate change represents one of the biggest challenges facing humankind, and the primary objective of the carbon tax is to reduce greenhouse gas (GHG) emissions in a sustainable, cost-effective, and affordable manner,” the treasury said in a statement.

The tax is to start at 120 rand (US$8) per tonne of CO2. In the first phase, polluters will get 60 to 95% of carbon allowances free, bringing the effective tax rate down to R6 to R48 per tonne. These rates are to be reviewed before phase two, spanning 2023-30.

South Africa relies on coal for most of its energy. Politically, the priority for the electricity sector has been to tackle rolling blackouts and state-owned utility Eskom’s mountain of debt.

The government’s blueprint for the sector to 2030 includes one gigawatt of coal capacity already in planning before pivoting to gas, nuclear, and renewables. It foresees adding 8.1 GW of gas, 2.5 GW of nuclear, 2.5 GW of hydropower, 5.7 GW, of solar, and 8.1 GW of wind, in the latest iteration reported by industry publication Go Legal.

Meanwhile the mining sector, a major employer, is struggling with unreliable power and high labour costs. Anglo American Platinum complained last month the carbon tax would cost them R50 million ($3.4 million) in the first two years. Such concerns are behind years of delay and concessions to big emitters.

Campaigners welcomed the price on pollution, but said it needed to get higher to clean up the country’s economy.

“We commend the president for putting wheels to this long overdue issue,” said Morné du Plessis, head of WWF South Africa. “During the second phase, we will have to ramp up our transition ambitions significantly.”Climate Action Tracker rates South Africa’s climate targets “highly insufficient”.