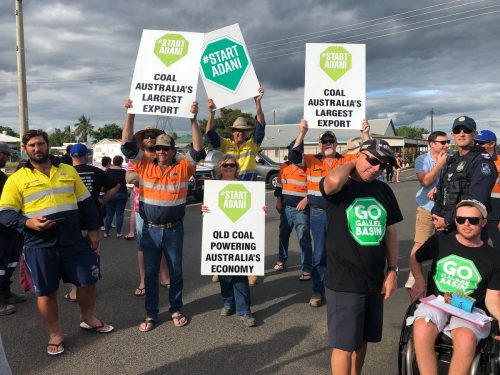 The intensity surrounding recent national elections in Australia is rolling over into the post-campaign period, with the country’s greenhouse gas emissions still rising, its potential for renewable energy development still catching attention, the fight over the massive Carmichael coal mine reaching a fever pitch, and its most heavily-populated state feeling the full force of climate-driven drought.

Earlier this week, newly-appointed Resources Minister Matt Canavan was dismissive after the country filed its latest annual greenhouse gas inventory with the United Nations, showing its net emissions rising from 534.7 to 537 million tonnes between 2017 and 2018, the fourth annual increase in a row.

“A lot of people comment on the fact that carbon emissions have gone up in Australia in the last couple of years, and they have, but that’s almost principally due to the construction or bringing online of LNG export terminals,” Canavan said, ignoring an avalanche of research findings and public concern that natural gas is anything but a “bridge” to a renewable energy future.

“Yes, from a carbon accounting perspective, that increases Australia’s carbon emissions because we are the country where the gas is liquified. However, the gas is then used in other countries and they use the gas to replace, often coal, but sometimes dirtier forms of power, and that helps the world’s carbon emissions,” he said.

“So we’ve got to take a balanced viewpoint here, because I certainly think the export of Australian gas is helping the world lower its carbon emissions, even though there is an issue in how it is accounted for country to country.”

In a separate statement, Energy and Emissions Reduction Minister Angus Taylor told media the Liberal-National Coalition government’s climate targets are “ambitious”, even though its 26 to 28% emissions reduction goal is out of step with the 2015 Paris Agreement—which itself falls short of what’s need to stabilize the global climate.

Taylor encouraged the opposition Labor Party to “agree to the 26% target”. And while Labor set a considerably more ambitious 45% threshold in its election platform, there is now much uncertainty about whether that policy will survive a post-election change in party leadership.

“Labor had tried to capitalize on the Coalition’s lack of substantive climate change policy going into the election, by offering voters an expansive platform that included increased targets for emissions reductions and renewable energy, and a reasonably ambitious plan for electric vehicles,” RenewEconomy reports. But that momentum was undone by a “concerted scare campaign” about the cost of the plan, “extraordinary fear-mongering” about the economic impacts and supposed “threat” of EVs, and Labor’s own equivocation on the Carmichael mine, a plan that India-based Adani Mining is pushing hard in Canavan’s resource-dependent home state of Queensland.

“Now, it’s all up for review,” the publication notes. “Labor’s Right faction will no doubt want to drag the party back towards the ‘sensible centre’”, minimize the more ambitious elements of the previous platform, and take a “‘slow-and-steady’ approach, making its stance on climate change as small a target as possible against attacks from conservatives.” Labor Left “will want to retain its expansive plans for renewable energy investment and emissions reduction targets,” but its choice of leader might end with those goals being downgraded in counterpoint to jobs and workers.

Those political battles are playing out despite modelling this week by energy analysts at RepuTex, which shows Australia hitting 50% electricity by 2030, even without government intervention. In February, RenewEconomy said the country’s current pace of solar and wind development had it on track for 100% renewable electricity by 2032.

The RepuTex study indicates that “a surge in renewable energy driven by state schemes and rooftop solar installations will reduce wholesale prices from A$85 per MWh to $70 over the next three years,” The Guardian reports. “Lower prices will make gas- and coal-fired power less competitive, even without a market mechanism to make fossil fuels reflect the cost of pollution or a direct constraint on emissions, although a lack of federal policy could lead to longer-term price rises.”

As RenewEconomy Editor Giles Parkinson explained in his post-election analysis, a federal renewable energy target has been driving development and investment in recent years, even with climate deniers in charge of Australia’s federal government since 2013. But with the federal target due to expire next year, “RepuTex noted that state policy was now the dominant signal for new investment in the national energy market,” The Guardian notes.

From that starting point, “the competitive pressure of new low-cost supply is modelled to significantly limit demand for coal-fired energy, even without a direct emission constraint,” said RepuTex Head of Research Bret Harper. “As a result, fossil fuel generation is modelled to be more broadly on the decline, displaced by a large volume of solar, wind, and pumped hydro.”

But eventually, as falling prices force expensive coal-fired power plants to close, the lack of any coherent federal energy policy could lead to higher consumer prices.

“The low price environment over the medium term is good for consumers, but not so good for inflexible generators, which will be at risk of being pushed out of the market by cheaper, more flexible technologies,” Harper said. “Without a plan to prepare for the exit of fossil fuel generation we forecast a return to a boom-bust investment cycle, with elevated wholesale prices and increased volatility, rather than a more orderly transition.”

The picture at the state level is decidedly mixed, with restrictive regulations in Queensland creating insurmountable challenges for solar installers and the Australian Energy Market Operator warning that grid reliability will be at risk in Western Australia if decision-makers don’t move fast to account for rapid uptake of rooftop solar and other renewables.

And a different challenge is emerging in New South Wales, Australia’s most populous state, where prolonged drought has brought dam levels to just over 50%, down from 96% in April 2017, forcing officials to impose water restrictions for the first time in a decade, Reuters reports.

And then there’s the Adani mine. After the Coalition won an election in which the project emerged as a flashpoint, its approval is largely considered a foregone conclusion, with Queensland’s Labor government calling for a timeline to clear the remaining regulatory hurdles it faces.

“Enough is enough. What I’m asking for today is, I’m asking for the two parties, Adani and the independent regulator, to sit down with the coordinator general. I’d like them to meet tomorrow, and work up, with a definite time frame on decisions around these reports.” Premier Annastacia Palaszczuk told media last week. “I want a timeline, hopefully, agreed to by all of the parties by Friday. So that I can release that to the public, so the community has certainty, I have certainty, everybody has certainty, about the process going forward.”

The stakes in that process are incredibly high.

“Many political campaigns were focused on the mine, using hashtags like #StopAdani or #StartAdani,” Quartz reports. “Adani, the Indian conglomerate that has an exploration licence for the coal mine, plans to build it into one of the world’s largest. Emissions from the process of mining at Carmichael, and the burning of the coal produced, would each separately be more than emissions produced by entire countries like Austria, Denmark, and Norway.”

But even with the state and national governments singing from the same songbook, there’s no guarantee that investors will get in line.

Last November, major Korean banks stepped away from any role in funding the project. Earlier this month, Adani was pinning its hopes for a market for Carmichael coal on demand in the Asia-Pacific region. But the Australian government’s own data now show declining demand in India, and the region’s broader investment focus is quickly pivoting to less costly renewables.

And now, the world’s biggest mining company has abandoned the project, with BHP Group CFO Peter Beavan telling investors last week the firm has “no appetite” to expand its thermal coal assets and acknowledging that the polluting fuel will be phased out “potentially sooner than expected,” Reuters reports. Then again, “Beavan was talking about the type of coal used mainly in power generation, and this forms a tiny part of BHP’s total coal portfolio, which is dominated by coking coal used mainly for steelmaking,” the news agency adds.

“The Adani Carmichael coal mine is a line-in-the-sand project for Australia largely because, in the six-years that activists have been fighting against it, the anti-fossil fuels movement has grown in Australia to reach critical mass,” Brisbane-based organizer Alana Jessop told The Mix. “Recent studies show that 65% of Australians do not support the project, and that figure really shows how much work the movement has undergone, to raise awareness with everyday Australians. Before Adani was on my radar, I was aware that coal, oil, and gas in Australia was problem—but I wasn’t aware of just how bad it has become. Adani is Australia’s wake-up call.”

Even with Adani standing as a litmus test for the future of coal, Quartz points to an equally significant decision just days after the Australian election, with investors abandoning a much larger mine that was to have been built just 30 kilometres from the Carmichael site.

“The China Stone project, run by MacMines AustAsia and wholly owned by the Meijin Energy Group, which is China’s largest producer of metallurgical coke, was expected to produce 38 million tonnes of coal each year. The A$6.7-billion (US$4.6-billion) mine would have supported 3,000 jobs and contributed A$188 million to the Queensland government’s coffers each year for the 25 years the mining was expected to last,” the publication notes, citing a May 23 report by the Australian Broadcasting Corporation (ABC).

But “all that now seems to be up in the air,” after MacMines “terminated the process of acquiring mining leases from the government in March. Though the company wouldn’t comment on why it did that, analysts believe that the coal mine is neither financially viable nor in China’s interests anymore.”

“China has made it very, very clear it wants to progressively reduce exposure to highly polluting coal-fired power generation,” said Tim Buckley of the Institute of Energy Economics and Financial Analysis. “That won’t happen overnight, it will take decades to come,” but “if you are moving in that direction, the last thing you want to do is introduce a whole lot more expensive imported thermal coal.”