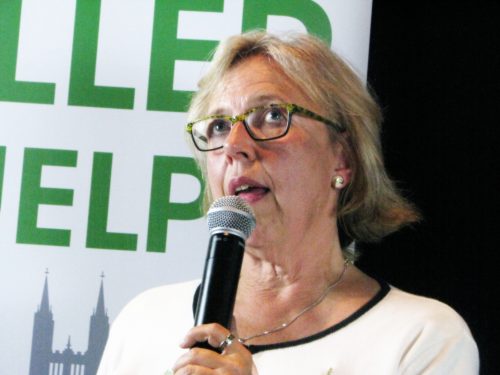 Canadian Green Party leader Elizabeth May appears to be borrowing a page from Conservative Andrew Scheer’s playbook, with a campaign promise to free the country from oil imports and rely on domestic crude while it still needs to.

May says Canada will have to get off oil by mid-century to meet global climate targets, The Canadian Press reports. But in the meantime, she wants the country to end all oil imports by 2030.

“Scheer’s plan calls for Canada to import no foreign oil by 2030, partly by planning an energy corridor across Canada that could simplify the construction of pipelines able to move Alberta oil to any coast,” CP states. “He sees it as a way to find additional domestic markets for Canada’s oilsands, in a bid to increase their production.”

May’s proposal to “turn off the taps to oil imports” is “only a stopgap measure to keep foreign oil out until Canada can break its oil habit altogether,” the news agency adds. But even that is a nuanced promise: In 2050, CP says the Greens still see the Canadian petrochemical industry using bitumen feedstock for products like plastics, rubber, and paint.

Earlier this month, a report issued by the Washington, DC-based Center for International Environmental Law and five other organizations found that the plastics supply chain will account for 850 megatonnes of greenhouse gas emissions this year. “If plastic production and use grow as currently planned, by 2030, emissions could reach 1.34 gigatons per year—equivalent to the emissions released by more than 295 500-megawatt coal power plants,” the Center warned in a release. “By 2050, the production and disposal of plastic could generate 56 gigatons of emissions, as much as 14% of the Earth’s entire remaining carbon budget.”

CP’s coverage casts the Green Party platform as an influencer for Liberals and New Democrats, after MP Paul Manly (GPC, Nanaimo Ladysmith) won his Commons seat in a byelection earlier this month. But it gives May a pass on endorsing bitumen as a long-term prospect for petrochemical production, at a time when a planned boom in petroleum-sourced plastics and chemicals is seen as a severe threat to global climate goals—and a last lifeline for the fossil industry.

As for oil imports, “Canada’s oil producers already pump enough product to meet domestic demand,” the news agency adds, “but there are two problems: there is no pipeline from the oil-rich west to refineries in the east, and even if there were, those refineries aren’t equipped to handle the heavier bitumen that is the Alberta oilsands’ trademark.”May is proposing to address that by investing in synthetic oil upgraders. But a CBC News report last month revealed that the Irving Oil refinery, not the federal government, is calling the shots on oil imports from Saudi Arabia that have become something of a flashpoint among politicians.