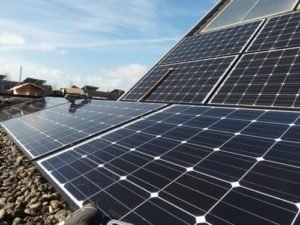 It isn’t an energy revolution if it doesn’t “provide low-income communities with better access to affordable clean energy technologies”, Yale Environment 360 reports, in a post that points to the nearly one-third of U.S. households that struggle to cover their energy bills.

“For decades, low-income households have tried to cope with rising energy costs,” yet “they often have the least access to energy-efficient or clean energy technologies,” e360 writes, citing University of Michigan energy justice researcher Tony Reames. “He and colleagues have found that the cost to upgrade to energy-efficient lightbulbs is twice as expensive in low-income neighborhoods as it is in more affluent areas. They have also found that for every dollar Michigan utilities spend on energy efficiency programs targeted at low-income consumers, they spend as much as US$4.34 on programs for higher-income consumers.”

That experience collides with another brutal statistical reality, e360 notes: according to the U.S. Energy Information Administration, one-fifth of households cut back on essentials like food and medicine to pay for heat and power, 14% of have received a disconnection notice, and 10% keep temperatures at “unsafe levels” to cut costs. Among the affected households, about half are African-American and 40% are Latino/Latina.

Reames told e360 that some of the ideas for his research came from his experience of owning a rental house in Kansas City. He recalled a low-income tenant asking him if he could get a deal on compact fluorescent bulbs for her unit, since the price was beyond what she could afford.

“I kept that idea with me for a couple of years,” he  said. “I had been reading the food justice studies looking at the cost of fresh fruit in poor and urban neighbourhoods and neighbourhoods of colour. Then I heard a story about drug stores charging more for medications…in zip codes that were either poor or primarily communities of colour.

“Bringing all those different ideas together, I wanted to try to look at this issue of access and affordability of energy-efficient technology. When we talk about simple ways to improve energy efficiency in people’s houses, if something as simple as a light bulb is going to cost you two times more, then we have some other challenges we need to address.”

Once the idea translated into research, it turned out that about half of the stores in lower-income neighbourhoods didn’t even stock LED bulbs—and the big retailers like Lowe’s and Home Depot that often serve as partners for utility energy efficiency programs had little or no presence in inner city communities.

“One of the reasons I got into this work is the fuel poverty concept in the UK and other European countries,” he said. “They’ve actually said that [energy poverty] is a distinct form of poverty that has all these other health implications, social implications. They view it as a national issue. It’s codified in law. There are agencies that are working on ways to address this. They have maps, they have research funding for this topic. What that does is allow them to identify a number of households and a target, so they look to reduce fuel poverty by X percent every year. That’s something I would really love here in the U.S.”

Reames’ interview with e360 covers the distribution of funding through state and utility energy efficiency programs, the main obstacles minority and low-income communities face to reducing their energy and carbon footprints, the importance of community “anchors” or partners in delivering support where it’s most needed, and the institutional structures that make programs less accessible to poor people.