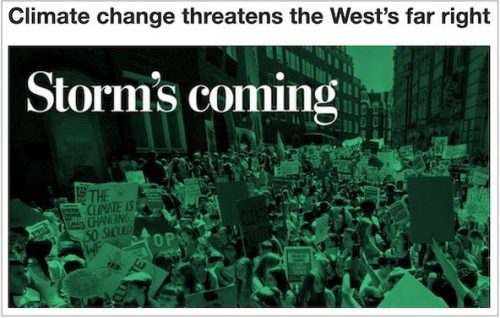 “The potential rise of the far right dominated news coverage ahead of the vote, and it was indeed significant,” WorldView reports, with extreme parties scoring significant wins in the UK, France, and Italy.

“But, at least as far as the stewardship of the European Union is concerned, the far right will remain on the margins,” the newsletter adds. “That’s thanks to the strong showing from liberal, pro-European parties as well as a dramatic surge of votes for the Greens. A likely alliance between these forces and centrist parties means the EU’s agenda could be even more antithetical to that of the euroskeptics who often hog the headlines.”

“As always, a wide variety of voices will be represented in the European Parliament,” said EU envoy Stavros Lambrinidis in Washington,. “There is a clear majority that supports the European Union and that will work as in the past to make our union stronger, more secure, happier, and wealthier.”

The biggest surprise, WorldView states, was that parliamentary Greens placed second in Germany and third in France, while making gains—largely at the expense of more traditional, established parties—across Northern Europe and parts of Western Europe. And climate change appears to have been a key ballot box issue.

“More than a protest vote, Green strength also rests on deep concern in Germany about the state of the planet. German voters told pollsters the environment was their top concern going into the vote, and that was apparent in the outcome,” the Post reports. “Exit polls in Germany showed the Greens to be the overwhelming top choice for young voters and for first-time voters. The party also did especially well in cities, while taking voters from both the centre-left and the centre-right parties.”

The Post and Euronews both framed the result as nothing less than a green wave, with Euronews republishing a tweet that showed the Greens’ seat count, at 71, literally running off the slide template that one TV news outlet had designed to report the results.

“When you crash the chart they prepared,” tweeted @TerryReintke.

“This is confirmation for us that the topics we’ve been working on for years are the topics that matter to the public in their everyday life, and for the future of their children,” said newly-elected Greens MEP Sergey Lagodinsky in Germany. “We had times when we wondered: Is this a fringe agenda? Now we know it’s not. It’s the mainstream agenda.”

With the Post citing the #FridaysforFuture movement as an influence, Lagodinsky added that “the new generation has been re-politicized. We thought about these young people as people who only stare at their screens. But they can walk the streets. And that has an impact on their parents and grandparents.”

“Climate protests have taken place in the weeks leading up to the election,” Euronews notes, “with schoolchildren across Europe staging mass school walk-outs over the issue.”

The Post coverage looks at the growing maturity of the European Greens movement, and the scope for it to work with other parties in the EU parliament. “Green is not the sole property of the Green Party,” said Frans Timmermans, the senior Dutch politician who led the centre-left ticket for the EU.

“He said other political parties—notably his own—were also focusing on the environment,” the Times notes, and “that will benefit the Greens. As they sweep into Parliament, they will have to team up with others to enact their agenda, as they have already with success inside individual countries.”

German news outlet DW points to the relatively high turnout, at nearly 51% of 400 million eligible voters, as another surprise.

“Voting is power,” said EU Competition Commissioner Margrethe Vestager, a candidate for the next president of the European Commission. “You have politicians running for the European Parliament who want to destroy it. You have parties running for the European Parliament who call themselves nationalists, but who seem to be willing to sell out to the Russians. So something has been at stake, and that I think has also made people consider, ‘Maybe we should vote this time.'”

Timmermans called the turnout “a great signal for a functioning democracy.”