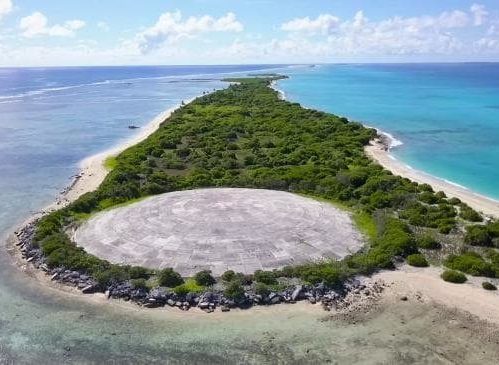 The huge, concrete dome the U.S. military built on Enewetak atoll in the Marshall Islands to contain waste from early atomic bomb tests may be leaking radiation into the Pacific Ocean, even though it was designed to last for 25,000 years, UN Secretary General Antonio Guterres warned during his recent trip to the Pacific islands.

Describing the structure as “a kind of coffin”, Guterres warned the concrete is developing significant cracks, and could break apart in a tropical storm, Global News reports.

“The consequences of these have been quite dramatic in relation to health, in relation to the poisoning of waters in some areas,” Guterres said. “I’ve just been with the president of the Marshall Islands, who is very worried because there is a risk of leaking of radioactive materials.”

“The Marshall Islands, a chain of islands and atolls located between Hawaii and Papua New Guinea, was home to a series of nuclear weapons tests from 1946-58 carried out by the U.S. and France,” Global notes. “One of the tests included the 1954 Castle Bravo hydrogen bomb, the most powerful ever detonated by the U.S., and roughly 1,000 times bigger than the Little Boy atomic bomb dropped on Hiroshima, according to the Atomic Heritage Foundation.”

The blast “was more than 2½ times greater than expected and caused far higher levels of fallout than scientists had predicted, covering nearby inhabited islands in radioactive debris.”

“Approximately five hours after the detonation, it began to rain radioactive fallout at Rongelap,” Marshallese Health Minister Jeton Anjain later testified. “Within hours, the atoll was covered with a fine, white, powder-like substance. No one knew it was radioactive fallout. The children played in the ‘snow.’ They ate it.”

The concrete dome was built in the 1970s as a temporary storage site for radioactive soil and ash.